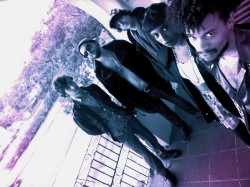 Dressed in full retro regalia, Sexy Dex and The Fresh resemble a group of edgy, funky ’80s teenagers — but, when the band starts playing, there’s “a bit more going on,” says frontman Dexter Gilmore. He describes the sound of his newly minted group as “taking funk, R&B and pop from their beginnings up to this decade, and only taking the most interesting things from them.”

Sexy Dex and The Fresh includes Gilmore on guitar and vocals; Gabrielle Washington on vocals; Andrew Landry on bass; Evan Cvitanovic on drums; and Ben Buchbinder on keys. The group grew from Gilmore’s solo project in April 2014, and performed its first New Orleans show in November 2014. “I had been making stuff like this for years, but I was very self-conscious about being a frontman,” Gilmore says. “Evan was actually the one who convinced me to make it a live act.” The two gradually added more members to create Sexy Dex’s sound, and the band began co-writing songs.

Gilmore combines vocal inspiration from ’80s Motown act DeBarge with his love for shoegaze (a type of rock named for its introspective qualities). “I just love how it really challenges the ideas about the way guitar plays a role in music, by using it to create atmosphere, rather than just playing notes,” he says. “And then, we also love old video-game music and sounds. That can be heard in the style of synths I pick.” These synths come through in irresistibly danceable, rough-edged, dream-poppy tracks, with Washington’s voice taking a powerful front seat from time to time.

When it comes to composing songs, the band avoids overthinking it. “We try not to be too cliché, and we don’t let the fact that we’re good musicians cloud our songwriting, because, let’s be real — you can be the most talented musician in the world and still make bad music,” Gilmore says. “I feel like anyone would appreciate the music. It comes from a real place, and we put on a good show.” sexydex.bandcamp.com
Playing His Cards Right: Attorney Mark Duncan adds author to his resume.

New Orleans-born lawyer Mark Duncan spent more than a decade in Manhattan, doing “high-powered litigation” for a roster of clients whose names you’d recognize. “After 11 years in New York, I got married and had my first daughter,” he says. “The veil was lifted, and I returned to my New Orleans roots.”

He’d long considered writing a novel but hadn’t taken the plunge. After partnering with attorney Michelle Mayne Davis to form Davis & Duncan, LLC in 2008, he got the push he needed. “My law partner obviously sees a lot of my writing,” he says. “She kind of prodded me a little bit, about three or four years ago.” So he got started — and he ended up writing not one book, but two.

Last year, Duncan self-published All In the Cards, a novel loosely based on a bitter family succession case he worked on. “It’s the story of Charlie and Hazel,” he says. “Charlie finds himself cooped up in his snowball stand, while his beloved wife, Hazel, is dying in a hospital from complications from diabetes.” Based in New Orleans, the novel will ring true to anyone who’s been involved in bitter legal matters with family, or anyone who’s loved in spite of difficulty. “It’s raw; it’s unpretentious; it reminds you that life’s not a fairy tale,” Duncan says. “It’s not a romance novel. It’s measured more by the storms that you [weather] — and how you handle a crisis that only the two of you share.”

Duncan is also interested in exploring human nature. “When we talk about the inspiration … yes, in part, it was from my work,” he says. “But it was also from this idea in contemporary American culture that you’re sort of as good as your worst moment.” He describes his main character, Charlie, as a curmudgeon who’s tempered by his patient wife, Hazel. “Most of us have fears; most of us have flaws,” Duncan says. “He’s still a loving human being.” All In the Cards is available in paperback and e-book format on Amazon.
Radcliffe Bailey: Recent Works at the CAC – History, identity and ancestry converge in this artist’s powerful pieces.

On March 7, sculptor and painter Radcliffe Bailey brings his mixed-media work to the Contemporary Arts Center New Orleans. Bailey, who grew up in Atlanta, Georgia, thoughtfully addresses themes of history, family and the passage of time in his works. Though many of his pieces share materials in common — like red Georgia clay, traditional African sculptures and piano keys — their executions often differ.

“When I’m making work, every piece is a page out of a book — probably the book of my life,” Bailey says in a video interview recorded by Jack Shainman Gallery, the Atlanta-based gallery that has represented him since 2002. He acknowledges that his work often goes in “different directions,” but he sees them as “the same … If they were different bodies [of work], I see them as chapters.”

Bailey’s CAC exhibition will include the eighth iteration of “Windward Coast,” a large-scale installation made of piles and piles of long, wooden piano keys. The keys swell up into wave formations — and just above the surface of the waves bobs the head of an African man, painted in glittering black. The piece, which evokes profound loneliness and forces viewers to acknowledge our smallness, is also a reference to the Transatlantic slave trade’s brutal Middle Passage. Other works include a small number of works dedicated to the Yoruba trickster deity, Eshu-Elegba.

Radcliffe Bailey: Recent Works is on view at the CAC March 7-June 7. cacno.org