Catering to the Community

Richard Buchsbaum serves New Orleans in more ways than one. 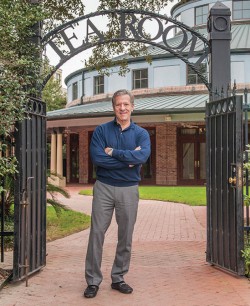 Sometimes, the things you wish would stick in people’s minds are not those that do. For instance, when Richard Buchsbaum moved to New Orleans nearly 30 years ago to help open the InterContinental New Orleans hotel, he noticed one thing immediately. “I was kind of taken aback by the condition of the streets,” he remembers. “What stayed in my mind more than anything else was driving down these horrible streets.”

Despite the streets, which have not improved, Buchsbaum stayed in the city. His hospitality career took him to the Sheraton New Orleans Hotel, and later to the Audubon Nature Institute, where he became vice president of food and beverage. He was excited to begin working with Audubon — but it meant he had to find a new gym. “I was with the Sheraton, and I was working out at the Sheraton’s fitness facility,” he says. “When I was offered the job at Audubon, I looked at all different outside gyms.”

He narrowed down a few options, knowing that most people who work out at a gym do so within three miles of their home or work. That was how he discovered the New Orleans Jewish Community Center’s fitness center and, by extension, its rich programming and diverse community.

“I had been connected with the Jewish community through a couple of organizations in the city, so, I was connected to a lot of the individuals, but never to the center of where Jewish life was,” Buchsbaum says. He toured the building, enjoying displays of kids’ artwork and peering into classrooms. “I was so absorbed with the reality that it was a very diverse fitness center,” he says. Here was something that, again, stuck with Buchsbaum; along with his partner, he became a member of the center.

He quickly became more involved with the JCC, joining the board of directors and then the board’s executive committee. “I had been president of the Make-A-Wish Foundation of Louisiana and the National Association of Catering Executives,” he says. “So I understood what it was to lead with a specific vision.”

This year, after serving in every capacity on the executive committee, Buchsbaum became president of the board of directors of the JCC. He’s working to realize his vision, which he shares with other community members. “My responsibility to the board is to engage our board members in activities that are being done with the J, for the J and by the J,” he says. “My biggest goal is to be able to break ground on our expansion plan in 2017.” To accomplish this goal, the JCC must continue to raise funds from the non-Jewish community, which it does chiefly through its fitness complex and kids’ day camps.

Along with increasing revenue, these offerings build stronger bridges between New Orleans’ Jewish and non-Jewish communities. “Bringing non-Jews into a Jewish environment is bringing people closer to Jewish life,” Buchsbaum says. In the case of the center’s day camps, “It’s a matter of educating and learning, for kids to be more tolerant and understanding of things that are not what they do at home.”

Buchsbaum is grateful to his work at Audubon for enabling him to devote time to the JCC. “Because it is our normal work life that brings us to the point where we can be so involved and donate our time,” he explains. “I’m fortunate — I work for two nonprofits. I get paid for one and volunteer for the other. And together, they make up who I am.”