The stunning model-turned-actress is set to become much more high profile this year, thanks to her roles in six different films all shot in Louisiana — mainly in New Orleans — including Get Hard and Hot Tub Time Machine 2. 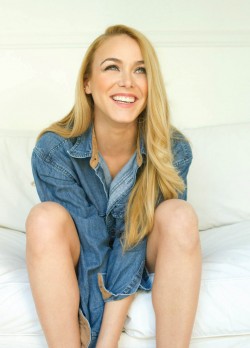 After gracing the covers of more than 20 magazines, posing for multiple ad campaigns and strutting down the runways from her hometown of Puerto Rico to multiple international venues as a much sought-after model, Mariana Paola Vicente has arrived on the feature-film landscape. The enthusiastic beauty has lived her life immersed in the world of arts and entertainment — both by appearing in television commercials as well as embracing painting, poetry, dance and music since her childhood days. Thanks to her undeniable beauty, talent and outgoing personality, Vicente rose to become Miss Universe Puerto Rico 2010, and she landed a coveted spot in the Top 10 in the Miss Universe 2010 competition held in Las Vegas. This year, she’ll be seen up on the silver screen in six movies, all of which were shot in Louisiana, giving her an even higher profile as she chases her dream to one day become a highly recognized actress. Five of those six films — Hot Tub Time Machine 2, Get Hard, The D-Train, Joe Dirt 2: Beautiful Loser and Selfless — were shot in New Orleans, where Vicente currently calls home.

“I’ve been based out of New Orleans for almost three years now,” says Vicente, a native of San Juan, who has found steady work as an actress in Hollywood South. The actress nixed her plans to move to New York City in 2012, and she opted to stay in New Orleans after spending that summer with family in New Orleans and Natchez, Mississippi. “I wanted to have some family time, and I wanted to detox from L.A. (where I had been based out of at that time, doing modeling and taking acting classes), before I was going to move to New York to work as an actor. And when you’re not from New Orleans you don’t really know that there is all this film work going on. You think it’s all partying and food. So while I was visiting, I discovered that I could work from New Orleans, and I had really wanted to act. And during my time in the South, I really fell in love with it and didn’t want to leave.”

Her decision to stay put in New Orleans proved lucrative for her foray into acting. “My first audition was for Hot Tub Time Machine 2, and, after a month, I booked American Horror Story,” she says. “After that, I was like, ‘I don’t think I’m going to leave! I’m going to stay here, I like it!’” Vicente wound up shooting an episode of FX’s intriguing horror anthology, American Horror Story: Coven, as Gwen. She then got hired for a part as Carol in two episodes of American Horror Story: Freak Show, the fourth season of the popular cable television series. “I hope they call me back for more,” she says.

The science-fiction comedy Hot Tub Time Machine 2, which includes Rob Corddry and Craig Robinson in its lineup, hit theaters on February 20. “It took awhile for it to be released,” Vicente says. “It was a unique experience; it was my first job, so I was super excited — and a little bit nervous — because it is a specific type of comedy. But I work really well under pressure. I had a great time with all the actors. Selfless, with Ryan Reynolds, is another film I shot in New Orleans. Both of those films were shot maybe three or four months apart, and that was almost three years ago. I’ve been patiently waiting for them to come out, but I’m sort of happy that they delayed the dates — because now I have six films coming out this year, and the premieres are all a month apart. It’s exciting! The first one, The D-Train, with Jack Black and James Marsden, just premiered in January at Sundance, and that one was such a fun film.”

Vicente was thrilled to be cast in the upcoming comedy Get Hard, starring Will Ferrell and Kevin Hart, which has a March 27 release date. “I play the friend of Alissa, who is played by Alison Brie,” Vicente says. “Alissa is Will Ferrell’s character’s fiancée in the movie, and I play sort of a mean girl (along with two other girls), but this isn’t high school. We’re all already either married or engaged, and kind of country club-ish, cliquey, gossipy and very high maintenance, so that was really fun. Alison Brie is an incredible actress and an incredible person. And we got to work with Will a lot; he is an amazing actor who improvised half the time, and, of course, everything he said was hilarious! It was so hard for me to keep a straight face, and I didn’t want to be unprofessional and ruin anything so I just swallowed my laughter. We were so grateful to be in the movie, but he’s a big actor, and he took the time to come over after we wrapped to thank us! How nice is he? I really appreciated it, and I think I’ll take that with me forever.”

Later this year, the comedy Joe Dirt 2: Beautiful Loser will debut, with a cast that includes David Spade, Christopher Walken, Brittany Daniel and Patrick Warburton, and Vicente as a flight attendant. Nocturna, a vampire film that will showcase Vicente as leading lady, will also rear its head on screens this year. “Nocturna was filmed in Baton Rouge, and it was very exciting, because, not only is it so different from anything I’ve done, but it’s also my first lead role, where I play Lydia Sonata. I’m looking forward to that!”

In between acting, which is her main passion, Vicente does some professional modeling, which she’s done since age 14. Recently, she renewed her contract as a spokesperson for Proactiv in Latin America for a third year. On occasion, Vicente has also played the role of TV host — for red carpet segments at the 2010 Latin Billboard Music Awards and for Miss Universe Puerto Rico 2012. She also spends time enjoying New Orleans, where she hopes she’ll continue to score film work for a very long time.

“New Orleans has been a great place for me to build up my resume; it’s often hard for actors to find work,” she says . “Also, the film industry in New Orleans is so different from L.A. — everyone is just so nice and so supportive of each other. I just love the atmosphere every time I do a film in New Orleans. And it’s so similar to Puerto Rico; I can feel Puerto Rico in New Orleans. It feels like home, and it’s great to have family in the South — including my brother and my godfather in Mississippi, and my cousins in New Orleans — because we’re very family oriented, and my family means everything to me. New Orleans feels like an island. It kind of has that mix of European and Caribbean style, and that kind of lifestyle. The way it looks even reminds me of Puerto Rico. And the food in New Orleans is so well-seasoned too. I’m a foodie, and the food really made an impression on me. I love Magazine Street and going for coffee, and just sitting and working on my computer at a table outside, getting some fresh air, or going to grab an occasional beer at the corner bar with friends. And I also love doing karaoke. I like watching all the people fishing at The Fly behind Audubon Zoo. People in New Orleans are so nice, and so passionate and talented. I love getting acclimated to this town like a local!”

3.21K
previous Catering to the Community
next Forward Motion