The Hole Deal: Artist John Bukaty explores a medium you might recognize. 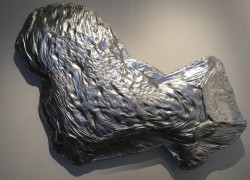 For most New Orleanians, the word “pothole” brings up only unpleasant associations — dented fenders, lost hubcaps and rattled teeth. But, last month, artist John Bukaty decided to explore the positive side of potholes’ negative space. “I first thought of this idea around October last year,” Bukaty says. “I was at a stoplight and visualized the process of filling the potholes with something, letting it harden and then seeing what came about.”

Bukaty, who’s known for his live paintings of musicians, had never created a show of sculptural works before. He experimented with materials to fill the potholes, settling on high-density foam for large pieces and plaster for smaller ones. “With both methods, I incorporated a thin plastic to achieve the texture,” he says. He then added just a few finishing touches. “The shapes and texture turned out so well that I didn’t need to do much,” he says. “I did paint all of the pieces for the nice, custom-finished look that I wanted.”

The process of finding holes for the project nearly left Bukaty stranded. “While we were scouting the whole city for potholes, we slowly went through one wider than our van, and, it was so deep, it felt like we hit a wall,” he remembers. “It nearly stopped us completely in our tracks.”

The New Orleans Pothole Show, or NOPOHOSHO, as the artist calls it, opened in March and continues through April 16. johnbukaty.com

Empowering the Arts: The Ashé Cultural Center grows, but its mission stays the same.
Just around the corner from the busy Oretha Castle Haley corridor, a new space is taking shape. It’s the Power House — the Ashé Cultural Arts Center’s new performing-arts venue, which will expand the center’s influence and further cement its place as a linchpin of the Oretha C. Haley community.

“We do about 100 events a year,” says Carol Bebelle, co-founder and executive director of Ashé. “That’s a combination of performances, musical theater and community programming, as well as meetings, conferences and workshops.” With the added space of the Power House, the center will have room to accommodate more events. “Our mission is really about opening doors and creating access for people,” Bebelle says.

The Power House boasts top-of-the-line technology in its 200-seat theater, which has already been inaugurated by Southern Rep — and, for the first time, Ashé has a dedicated art gallery. “This is something else that we’re excited about,” Bebelle says. The center partnered with Xavier University of Louisiana’s Community Arts Program to curate shows in the space. “This year’s art exhibits will include an homage to Jeffrey Cook, who was an artist-in-resident at Ashé,” she says. Other exhibits will include Ashé to Amen: African-Americans and Biblical Imagery, curated by Leslie King-Hammond, and a show of sculptor Frank Hayden’s work.

Bebelle calls Hayden’s sculpture of Dr. Martin Luther King, Jr., an “overlooked jewel” at the corner of Oretha Castle Haley Boulevard and Jackson Avenue. “We want to introduce people to Frank Hayden and his major portfolio of work,” she says.
Bebelle emphasizes that Ashé invites all neighborhood residents, new and established, to enjoy its programming. “One of the things the Power House does for us is say to the average Jane and Joe, ‘You deserve something new too,’” Bebelle says. “The whole community deserves the opportunity to see what’s new and cutting-edge. It doesn’t just belong on Canal Street, or in the Marigny and the Faubourg … [Our] work and stewardship is about creating a whole, healthy community.” ashecac.org

Auto-Matich: Ainsley Matich and the Broken Blues: This brassy blues band’s sound blends roots, country, soul and other influences.
Listen closely to the music of Ainsley Matich and the Broken Blues, and you’ll hear raw poetry along with Matich’s accomplished compositions. “I don’t like using the same phrases that other people use, so I try to come up with new ways to say the same old things,” says the band’s front-woman. Along with Matich on keys and lead vocals, the band includes Jonathan Solomon on bass, Joseph Boucha on drums and Andy Bower on baritone and tenor sax. Horn players, including Fritz Barrau and Jay Hagen on trumpet, and Jon Ramm and David Phy on trombone, rotate through.

Matich, Ramm and Boucha formed the band nearly three years ago, and Matich says she has a hard time describing the group’s sound. “We’re a blues band at heart, but we don’t always play strictly blues, and we don’t have the iconic blues guitar sound that so many people associate with the genre,” Matich says. “There are definitely pop elements, inspired mostly by Motown and the Beatles; country elements, inspired by Johnny Cash and Patsy Cline; and big-band elements, inspired by Duke Ellington and Count Basie — but all rolled up together with honky-tonk and blues.”

Last month, the band released Ainsley Matich and the Broken Blues: The Album, its debut record of 10 original tracks. Matich is already working on the next album, and she looks forward to playing more around New Orleans in the coming month. She’s also sure of one thing: She wants to stay independent. “It’s been a lot of hard work to put this album out on our own, but, because of that, we get to make all of the creative decisions,” Matich says. “That can be a pretty rare thing in this industry.” ainsleymatichblues.com

394
previous Man With a Plan
next Pillow Talk