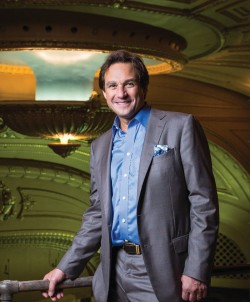 Many theaters around the world are named for Orpheus, the legendary Greek poet and musician whose talents could charm even sticks and stones. But New Orleans’ Orpheum Theater holds a special spot in the hearts of locals who grew up attending performances in the ornately appointed Beaux-Arts venue — from those who went there to see movies in the ’50s and ’60s, to audience members who fondly remember the Louisiana Philharmonic Orchestra’s long tenure in its original home.

Originally built in 1918, the Orpheum became a home for vaudeville in the 1920s, and went on to host silent movies, “talkies,” live music and a range of other shows. After Hurricane Katrina flooded the theater and forced it to close nearly a decade ago, it passed from owner to owner with no clear plan for restoration.

That cycle ended in 2013, when Dr. Eric George of ERG Enterprises, with partners Roland and Mary von Kurnatowski, bought the Orpheum. Now, ERG is well into a massive renovation that will restore the building’s former glory and ensure its viability long into the future. “It’s been a real challenge,” Dr. George says. “With that said, we are fully committed to maintaining its historical detail. Anything less would be a disservice to the venue.”

A full construction team has been working daily since last summer to clear the space of debris; clean and repaint it; and restore architectural details like the intricately painted ceiling. “We felt like The Orpheum Theater is bigger than us,” says Barrett Cooper, chief operating officer at ERG. “It’s been around longer than us, and will be around long after we’re gone.”

Modern updates will play a discreet part in the renovation, including a new hydraulic floor that can be lifted and lowered to create sloped or flat footing, with or without seats installed. “The floor will give us the flexibility to accommodate any different type of event,” Cooper says. “What’s cool about it is that we can raise and lower it quite quickly.” So, even if the Orpheum were to host a matinee concert or daytime corporate event that required a theater-style sloped floor, it could be ready that same evening to host a wedding on a flat, dance-ready floor. “The possibilities are endless,” Cooper says.

Other new additions include a kitchen in the theater’s basement, which will preclude the need for outside caterers and, again, allow the space to host a huge range of events. There’s also an as-yet-to-be-determined basement space, where, previously, giant blocks of dry ice helped cool the theater from below. “There’s a really neat thing in the basement,” Cooper says. “Directly under the floor of the theater, there is, essentially, a walled-in [box-like] area. We certainly want to use that in a creative way.”

To Dr. George, the long-neglected theater is much more than a restoration project — it’s a chance to give New Orleans back a piece of its history. “The Orpheum Theater really belongs to the city and the people of New Orleans,” he says. “We are simply the custodians returning it to its proper place.” The restoration is proceeding on time for the Louisiana Philharmonic Orchestra’s return this fall, and it has already stirred huge anticipation and excitement among New Orleanians. Nearly everyone has a story about the Orpheum. “The nostalgia and memories that we heard from people are just unbelievable,” Cooper says. “It’s humbling to know we’re involved in something that’s so important to so many people.”

Dr. George notes that the Orpheum is just one example of ERG’s dedication to quality and attention to detail. “It’s the focus of everything we do,” he says. “Our goal is to create an enjoyable and memorable experience for our patrons.” The company’s investments include hospitals and medical centers; luxury hotels like the Windsor Court New Orleans and Pontchartrain Hotel; an aviation company; technology companies; and too many more industries and holdings to list. “Really, we’re a fully diversified investment capital company,” Cooper says. “We do all this with maintaining a high standard of quality. That’s what the ERG Enterprises brand is based on.”