Home IN THIS ISSUE The Electric C.J. Spiller
IN THIS ISSUE
SPORTS
April 1, 2015 Paul Wegmann 0

Saints Sign a Star to Light Up the Superdome 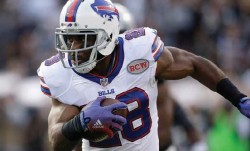 In a 2015 offseason marked by trades and moves wilder than any rumor dared suggest, the Saints boldly acquired a legitimate NFL star in C.J. Spiller. A former ninth-overall, first-round draft pick out of Clemson University, Spiller could be in for a big year following his years in exile, playing in the far north for the Buffalo Bills. After losing the well-loved and extremely effective Pierre Thomas and Darren Sproles in the passing game over the last two mid-season breaks, the Saints were in the market for a running back, either via free agency or the draft. The list of available backs in either category was a short one, allowing the best backs their choice of destination; yet Spiller, a past All Pro in 2012, wanted to come to the Saints. “I’ve been following this offense very closely,” he says. “We tried to do some similar stuff at Buffalo early in my career. The way that [the Saints] use their running backs, in general, is very intriguing. If you were in my position, you would be a fool not to visit, or at least see how they could utilize your skill set — especially my type of skill set. I am looking forward to it, whatever my role may be. Anything that [you] can do to try and help the offense be successful and help the team be successful — that is what you have to do. You have to put your ego aside, because at the end of the day, there’s only one thing that matters, and that’s getting to the playoffs and trying to win a Super Bowl.”

Spiller’s most successful stretch as a Bill came in the second half of 2011 and throughout 2012, under well-known offensive guru and head coach Chan Gailey. In 2012, he gained over 1,700 yards from scrimmage on just 250 touches, gathering a remarkable 6.2 yards per carry and 10.7 yards per reception. Entering the 2015 season, he displays a range of elite talents, including vision, agility, explosiveness and top-flight speed; he also has another head coach, Sean Payton, who knows how to exploit those skills.

Even though their systems are technically different, perhaps the greatest similarity between Payton’s and Gailey’s offensive methodologies is their fondness for spreading out defenses using multiple receivers and creating mismatches around linebackers, leaving large seams that players can run through to make big plays. When defenses take players off the line to add backs to the secondary to allow greater coverage, that frees up the running game. The system works all the better if a running back is available who can both run and receive effectively. This concept also favors running backs who can make big plays, and it is just possible that, even during the Sean Payton era, and possibly not since George Rogers in 1981-82, the Saints have never had a running back with Spiller’s big-play potential. In five seasons, Spiller has had 17 touches of 30 or more yards — nine of which came in that 2012 season — and he has been particularly effective indoors, where over the course of 11 career games, he has averaged 5.86 yards per carry.

Altogether, given Spiller’s past durability (he has been active for 70 out of a possible 80 career games, and before last year, he had only missed three career games), the Saints are on the cusp of featuring a back who can both run and catch on a level rarely seen in franchise history. The Saints also face a very unusual turnover in the top targets for Drew Brees to throw to: Since last year, four of the top six reception leaders, comprising 314 targets, have departed. Thus, a player of Spiller’s skill set is perfectly positioned to fill this major need and opportunity. Much may be made of the fact that Spiller has, both in college and in the pros, typically split work in a shared backfield, but Sean Payton will give him plenty of work. Start with the fact that, since Payton joined the Saints in 2006, Saints backs have totaled at least 70 receptions on six different occasions. Then, consider Payton’s past history with running backs. Pierre Thomas was an undrafted free agent, and he ended up with the highest yards-per-carry total for any running back in Saints history. During Darren Sproles’ last year in San Diego, he had under 800 total yards from scrimmage; but during his first year under Payton, he had nearly double that, with over 1,300 total yards from scrimmage, and he set the NFL record for most total yards in a season. Former Saint Chris Ivory, who, like Thomas, was an undrafted free agent, averaged 5.1 yards per carry with the Saints, and yet he averaged just 4.1 yards with the New York Jets last year.

In 2015, C.J. Spiller, in space, on the receiving end of a swing pass from Drew Brees, will be a beauty to behold. Spiller on a breakaway run, perhaps sprung loose by new All-Pro center Max Unger, will strike quickly and dangerously. For the fans watching it happen, it might actually look a little like lightning in a bottle, or maybe in a Dome.

145
previous Pillow Talk
next From Contempt to Contentment