Azie Tesfai: A Bright, Shining Jewel of an Actress

The gorgeous and charitable actress and entrepreneur sparkles on the popular new comedy-drama series Jane the Virgin and charms with her altruistic jewelry line, Fortuned Culture. 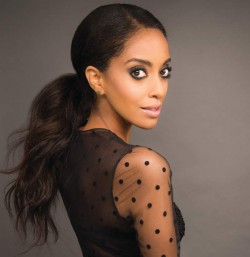 Naysayers wondered whether a show based on a Venezuelan telenovela — with the premise of a hard-working and devout Latina virgin becoming mistakenly artificially inseminated (by her now-married teenage crush, no less — would fly. But Jane the Virgin, the charming, endearing and well-crafted dramedy set in Miami, which debuted last fall on the CW, has done nothing but soar. Portraying the tough, confident and beautiful detective Nadine Hansan on the buzz-worthy series, Azie Tesfai plays rival partner to Michael Cordero, Jr. (Brett Dier), homicide detective and still-smitten former fiancé of Jane Villanueva (Gina Rodriguez), who works hard to pursue a “no strings attached” relationship with Michael, while trying to get him to move on from Jane.

“I have such a hard time with that, because Nadine and I are so opposite — I am such a girlie-girl through and through!” laughs Tesfai. “But Nadine is a different kind of character, and women aren’t normally portrayed like that on television; they go crazy and they’re emotional and they cry and throw things, but Nadine is very strong, capable and composed, and she keeps everything in check. She can handle this type of relationship! She almost functions in a very masculine way; her career comes first, and, even with her romantic involvement with Michael or whatever, she never lets that pursuit distract her from her career as a detective. I respect her a lot, and it’s been such a huge lesson for me as a woman. Nadine has affected me in a positive way.”

And it’s been nothing but positive for the Jane the Virgin, which has enjoyed much critical acclaim — even garnering a Golden Globe nomination, and winning American Film Institute and People’s Choice Awards in its infancy. Season one is in full swing and will run through May, and, on Jan. 15, the show was renewed for a second season. Tesfai couldn’t be happier with the news.

“It’s such a blessing to work with such a talented cast and crew,” she says. “I think the title was meant to be a little bit risqué. When I first heard it, I didn’t know what to expect about the show, but it’s just so funny, and it has so much heart and that’s why people fall in love with it. You’re just doing work you love with people you really like and respect, and then to have anyone watch it or receive it so well is overwhelming in the most beautiful way.” Tesfai promises that there’s some interesting stuff coming up with her character this month for fans of the show. “Something really shocking with Nadine is going to freak people out!” she laughs.

“It’s amazing! I was shocked when I read it, but our show runner is a genius and has such a distinct vision that every sharp turn makes sense for the character. In life you’ll experience things you don’t expect, but you respond as the character you’ve always played. It’s nice to have such extreme story lines and know it’s going to be shown in such a grounded, real way, and I think that’s why people like the show so much — they feel they can relate to it.”

As a native Californian with an East African descent, Tesfai is proud of the diverse ethnic cultures — including Puerto Rican, Israeli, Mexican and Italian — that are represented in the cast of Jane the Virgin. “It’s so cool,” she says. “I’m Eritrean, and my Mom’s family is from Ethiopia, and we all really want to make our cultures proud.”

Although Tesfai is on a fast path to becoming one of Hollywood’s actresses to watch, the University of California, Berkeley graduate didn’t always have her sights set on the world of acting. “I wanted nothing to do with it,” she says. “I grew up in L.A., and my best friend was a child actor, and I wanted to be as far away from the industry as I could get.”

Tesfai loved theater as a hobby and creative outlet, but she focused on school instead. However, she embraced an opportunity that came her way right before she earned her Bachelor of Science in Business Administration. “I thought I’d be an entertainment or corporate lawyer, and I was planning on applying to law school, but, in my last semester, I got the chance to audition for [Wicked Wicked Games],” she says. “I was kind of excited to take a break and do this random thing — why not? Nothing’s going to come of it, I thought, but I ended up getting it. I didn’t drop out of college, because that would have made my mother very upset! So I was going back to school! It was the most amazing first job, and it made me realize that I wanted to try to do this. I lived in beautiful San Diego, and I had my dog, and Tatum O’Neal was the lead, and she was really lovely and protective over me. And I fell in love with acting. I knew this was what I wanted to do!”

The brainy, kind-hearted and exotic beauty went on to procure roles on multiple popular hit television shows, including Melrose Place, Law & Order: Special Victims Unit, and Franklin & Bash. And, in addition to her finding success in Hollywood, Tesfai never gave up her dream of becoming an entrepreneur. “I knew I wanted to have a business of some sort one day.”

Today, Tesfai’s business, dubbed Fortuned Culture (fortunedculture.com), is one built from her heart of gold and her backbone of benevolence. After witnessing the plight of people firsthand during trips to East Africa when she was young, Tesfai founded the line of handmade jewelry that she helps design to benefit those struggling with poverty, hunger and other issues relevant to developing countries. “It’s such a labor of love,” she says. “I started it just wanting to help and to be of service to people who deserved everything and didn’t have it, and it’s grown to a whole new level. I think everybody wants to help one another, and I really wanted to think of a tangible way to connect all of us to do that.”

Proceeds from each piece from the Fortuned Culture collection support specific causes in certain countries. “I think charity can be scary when people don’t know where their money goes, so I wanted to be very clear with what we’re giving,” Tesfai says. “For instance, a health bracelet gives 65 meals to one child. And nobody anywhere is less than anybody else; we are all just born to a different set of circumstances. We are here on this earth to be of service to each other, and that’s the legacy to leave behind. You can’t take your car or your iPad with you, but, if you help someone else, when you’re gone, that gets passed on in a way that’s a lot more eternal than anything you could have.”

Indeed, Tesfai’s impassioned and serious commitment to helping others did not go unnoticed by give-back giant TOMS, which aligned with Fortuned Culture to further its mission. “Partnering with TOMS gave me the courage and a platform to be able to really expand and help people in a big way, and getting their seal of approval has been life-changing.”

Tesfai has two upcoming films slated for release later this year — Backlash, a short film, and the indie film, Me Him Her, starring Haley Joel Osment. And she does hope to visit New Orleans again soon; Tesfai came to New Orleans while she was working in Baton Rouge on a television series called Breakout Kings a few years ago. “I had the best time,” she says. “I went to New Orleans, and I loved it. I’m a foodie, and I like anything fried, and I feel like in New Orleans I can get the best food. I love it! And you just feel the history and the culture in the streets. I’ve never been for any festivals, and I love music so I know I would love Jazz Fest. New Orleans is so cool and beautiful, and the people are fantastic, and the place is so rich with history and culture. If I could do another series down there, I would. Yeah, I love New Orleans, and I can’t wait to get back as soon as I can.”