This hematology/oncology specialist connects with his patients and their families. 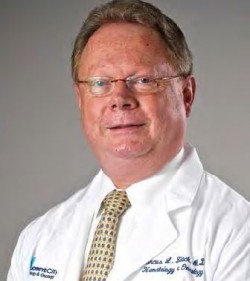 Growing up in South Georgia, Dr. Marcus Black lived next door to his family practitioner. He was friends with the doctor’s son. “I spent a great deal of time over at the doctor’s house, and got a feel for what it was like to be a doctor and take care of people,” he remembers. “It felt like this was something I’d really be interested in.”

As an undergraduate at Emory University in Atlanta, however, Dr. Black found another field that piqued his curiosity. “When I went to college, I had an interest in chemistry,” he says. “I decided the way I could help people might be by being a research chemist.” But there was something missing. “Frankly, after too many hours — too many days — in the laboratory, I realized that I didn’t have the personal contact with patients and people that our GP had, and I missed that,” he says. “I realized that maybe I was supposed to be a doctor out in practice.”

Dr. Black remained at Emory for both medical school and residency; there, he discovered a field that combined both his interest in science and his desire to work directly with patients. “I noticed that, particularly in the field of oncology, you really get to know the chemicals and how they work on a molecular basis in the body,” he says. “There are two different parts of your brain being used. You’ve got the scientific part … and on the other hand, seeing cancer patients is a very intense, personal type of care.”

After completing a fellowship in hematology/oncology, also at Emory, Dr. Black knew where he wanted to practice. He had visited New Orleans a few times during his fellowship, and “really fell in love with it,” he says. He joined the team at Crescent City Physicians in July 2012. “I like the friendly atmosphere here,” he says. “Nurses come in with a smile [and ask], ‘What can we do for you? How can we help you?’ I just felt really welcomed here.” Dr. Black has admitting privileges at both Touro Infirmary and East Jefferson General Hospital.

Even with an attentive care team and the latest advances in treatment, oncology care can be challenging for all involved. To ease the burden, Dr. Black makes an effort to connect personally with his patients and their loved ones. “It’s very important that we extend more than just medical knowledge,” he says. “We extend part of ourselves, and our empathy, to the patients and their families. Patients know when someone really cares about them.”

Dr. Black is optimistic about where his field is headed. “Medicine is changing,” he says. “I always say it’s a moving target. Oncology has made such progress — it’s exciting, when I get my journals each month, to read about the new developments that are coming out.” As part of a research consortium that includes physicians from Touro Infirmary, East Jefferson General Hospital and West Jefferson Medical Center, he remains on top of the latest developments in his field, and he works with colleagues to create new ones. “We have quite a few research protocols, and we get together once a month,” he says. “I just find medical oncology and hematology to be fascinating. Yes, there are going to be heartbreaks, but I see how we’re helping people. Right now really is an exciting time in medical oncology.”

When he’s not working with patients, Dr. Black enjoys the wider worldview that international travel affords. “My wife’s family is in England, so we travel a great deal,” he says. “[I enjoy] getting to a different world — a different mindset.”