This orthopaedic surgeon sees his work as a joint collaboration with patients. 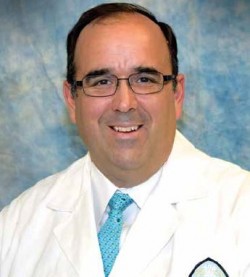 After graduating from Tulane University, Dr. Ramon Rodriguez decided not to follow in the footsteps of his father — an orthopaedic surgeon and chairman of Tulane University’s department of orthopaedic surgery. “I saw my dad working all different hours and thought, ‘I’m going to be smarter than him and do something different,’” Dr. Rodriguez says. For several years, he explored a range of other career options — but he ultimately heard medicine’s siren call. “I woke up in June of ’95, and said, ‘I want to be a doctor,’” he remembers.

So he set about completing his premedical training at the University of New Orleans, enrolling at Louisiana State University School of Medicine two years later. There, he discovered the draw of orthopaedics for himself. “I was open to other areas, but at the end of my third year, I did a two-week rotation in orthopaedic surgery,” he says. “I used a drill for the first time, and I was hooked.”

Within orthopaedics, Dr. Rodriguez was attracted to foot and ankle surgery for its complexity and variety. “It really was a marriage,” he says. “It was this epiphany of being able to do not just the things we did to fix ankle fractures, but also sports injuries.” As an orthopedist at Tulane University Medical Center, he works with a range of patients: young athletes at the top of their game; weekend warriors maintaining their fitness; and older patients seeking solutions for arthritis. “There are a lot of breakdown injuries,” Dr. Rodriguez says. “We’re doing not only that, but ankle sprains and Lisfranc injuries and real traumas. It’s a real gamut of things.”

Dr. Rodriguez says that while foot and ankle surgery is not glamorous among orthopaedic surgeons, he enjoys its unique challenges. “It’s more of a challenge [than knee, shoulder or elbow surgery] because you are walking on your foot and ankle all the time,” he explains. “There are many different vectors that you have to account for. It’s not as simple as a straight-line thing.”

He educates patients to ensure they have all necessary resources before they choose to undergo surgery. “Our society is trying to empower everybody with information, and information is a powerful thing,” he says. “We need to educate and inform our patients, and be selective. There may be surgery that you could do, but should you?” One important consideration prior to scheduling surgery for a foot or ankle problem is whether patients smoke or not. “In foot and ankle surgery in particular, smoking is a major setback,” he says. “Smoking really limits the ability of the body to heal. It robs oxygen from the body.”

Advances in medical technology — especially improvements in arthroscopy, a minimally invasive discipline that involves the insertion of a tiny camera into a joint — have led to new surgeries and shorter recovery times. “The quality of the instrumentation, as it’s directed toward the ankle, has improved immensely since I’ve been [practicing],” Dr. Rodriguez says. Tulane leads Louisiana in the provision of total-ankle replacement procedures, which can help patients recovering from post-traumatic, or older, injuries, as well as those suffering from degenerative and rheumatoid arthritis. “We’ve done markedly more [ankle replacements] than anyone else,” he says. “By and large, those patients are doing very well. It’s a revelation a person has when they’re able to walk and not have pain.”

Patients’ joy at being able to walk again after being incapacitated is the main reason Dr. Rodriguez is wholly invested in his work. “In orthopaedics in general, the ability to restore the human [body] to a level of function that was unattainable before you took care of them is a very powerful drug,” he says. “You really make an emotional connection with a patient.”