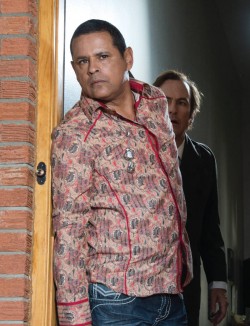 Talented actor Raymond Cruz is no stranger to playing amazing, chilling roles that leave a memorable etch in the minds of audiences; no fan of the mega-hit series Breaking Bad or its highly anticipated prequel Better Call Saul can forget the ferocious Mexican drug lord Tuco Salamanca that Cruz played with such explosive aplomb. Cruz’s latest role as heinous serial kidnapper Ariel Castro in Cleveland Abduction — the Lifetime Original Movie produced by Sony Pictures, which debuts on May 2 — will indeed be the stuff of nightmares.

Cleveland Abduction is based on the book Finding Me: A Decade of Darkness, A Life Reclaimed: A Memoir of the Cleveland Kidnappings, (Weinstein Books) authored by Castro’s first victim, Michelle Knight, who was abducted on August 21, 2002 as a 21-year-old single mother and later joined by Castro’s other captives, Amanda Berry and Gina DeJesus, who were all brutalized at his home until they escaped on May 6, 2013. Cruz says it was hard for him to play the demented Castro. “When you play a fictional character you have lots of freedom to create, but, with this guy, the challenge was to re-create the reality, and going to that dark place in his head to tell the story wasn’t easy,” Cruz says.

Cruz found inspiration in Knight’s astonishing tale of survival. “Michelle Knight is a hero,” he says. “You’ll end up in tears reading her book. All the things she went through, and she never gave up. She always looked toward the light at the end of the tunnel, and, she held on, and she made it! This guy was horrific; he tormented, starved and beat these poor girls. He physically, mentally and emotionally abused them in every way possible, and she never lost her sense of hope. It’s a real miracle, and she’s happy now. She held on to her strong belief in her faith throughout the whole ordeal, and that’s what got her through.”

The thought of Cruz playing such a repulsive character as Castro did not fly at first with his wife, Simi. “My wife vehemently asked me not to do it,” Cruz says. “Then she read the script and the book, and she changed her tune to, ‘Oh my God, you have to play this part!’” Cruz says. “She said, ‘If you don’t play the devil, the people aren’t going to care about the victim; you really have to do it!’ And I do whatever my wife says! I’m smart that way! If that’s the one message that will come out of this, it will save a lot of husband’s lives!” Cruz says, laughing.

Cruz says that Cleveland Abducted is different from anything Lifetime has ever done. “It looks like an independent, gritty type of film,” he says. “You’ll be both horrified and stunned by it, and you will walk away really respecting this woman.”
In addition to being a psychologically difficult role for Cruz, it was physically demanding for him as well. “I had to gain 28 pounds for the part, and I had only two weeks to do it — it was crazy,” says Cruz, who knew he had gained the requisite amount when he had trouble putting on his socks. “Oh yeah! When I was bending over, I was like, Oh my God! Perfect! And my 8-year-old son’s like, ‘You’re fat, Dad!’ and I go, ‘Good!’” And all the devouring of entire large pepperoni and jalapeño pizzas paid off. “When I saw myself on film, I didn’t even recognize myself! My agent said, ‘I don’t even recognize you at all!’ and I said, ‘Good!’ Seeing myself in that character, I don’t know how people would be involved with me at all!”

However, Cruz got back in tip top shape one month before he began filming the fourth season of Major Crimes (the popular police procedural series that begins June 8 on TNT). Cruz plays detective Julio Sanchez, a SAG Award-nominated role of his reprised from the hit series The Closer, which Cruz starred in from 2005 to 2012. “It’s such a great police drama, and the actors on it have a lot of chemistry together, but it too is emotionally and physically rough,” Cruz says. “I train so hard for that role, and I do a lot of my own stunts. The second episode of season 4 is so amazing! There will be some stuff revealed that fans have been waiting [to see] for a long time.”

Cruz’s detective Sanchez role is liked not only by his wife, but his mother gives it her seal of approval as well. “Sanchez is a good guy, and my mom loves watching Major Crimes,” Cruz says. “She’ll say, ‘Why can’t you get more parts like that?’ Because usually my mom looks at me with disgust all the time and says, ‘How could you do that?’ about my roles! I don’t know if it frightens her, but she just cannot believe how I transform into someone different. It’s hard for her to wrap her mind around it. She gets so disgusted with my work! She’s this little old Mexican lady who makes tamales and handmade tortillas, and she’s so disgusted with me! It’s so funny! She’ll ask, ‘What is wrong with you?’”

But what may be so wrong for Cruz’s mother is so right with Cruz’s fans, many who freaked when the violent meth-fueled psychopath Tuco Salamanca, one of the baddest of the bad on Breaking Bad, reappeared on Better Call Saul. “People told me they stood up and started screaming ‘No!’ at their televisions,” Cruz says. “They couldn’t believe it!” And Cruz wasn’t thrilled about reprising an erratic character capable of putting lit cigarettes out with his tongue (yes, he actually did that, along with other cigarette tricks that, “they would not put on television!”), but he rose to the occasion. “I get these really hard jobs, but the scenes were great, and it was fantastic to work with Bob Odenkirk and Vince Gilligan again.”

Cruz’s long list of acting accomplishments is impressive, from appearing in over 30 TV series, including NYPD Blue, My Name is Earl and Nip/Tuck, and in blockbuster films such as Clear and Present Danger with Harrison Ford and Training Day with Denzel Washington (where he’s in the movie’s most jaw-dropping scene). “You just know Ethan Hawke is not walking out of there,” Cruz says. Even with the hardcore bad guy roles that could potentially fall victim to stereotype, Cruz brings a refreshing realness to his characters. “I always come from a place of humanity, and I try to create this whole truth with the character and that’s why I think people can relate so much,” Cruz adds. “Tuco loves his family; messing with his family would be the wrong thing to do! Even Ariel Castro loved his daughter, and I had to find why he did what he did. I am not the actor who gets the easy rides, but I love the challenge of really good writing.”

Cruz’s penchant for exceptional writing comes from his lifelong love of reading. “I read like crazy when I was a kid,” Cruz says. “I read Moby Dick twice when I was 10! I’d go to the library and read every classic out there. Westerns, war novels, I loved it all. To Kill a Mockingbird and The Grapes of Wrath were two of my favorite books, so when I saw the film To Kill a Mockingbird, I was blown away. I was fascinated by the mechanics of storytelling.” The Mexican-American actor also loved watching old movies and cop shows when he was a child and says that he’d never have believed in a million years he’d ever have the career he enjoys today.

“The television was like a babysitter to me,” Cruz says. “I loved Baretta, Starsky & Hutch and Barney Miller, and if you would have told me I’d be playing a cop on a great show? There’s no way! We grew up poor in east L.A. with a single mom and five kids. I never even went to Hollywood or crossed the river into downtown until I was 19. I discovered and fell in love with the theater in junior high, but, in high school, I couldn’t get onstage; a drama teacher told me and an Indian kid that we didn’t look like actors so we could do the lights. I couldn’t get onstage either in college at Cal State Fullerton, but, I had a drama teacher who told me if I really wanted to act, I wouldn’t learn it there — and to find someone to teach me the craft. That was the best advice ever because it changed everything for me.”

Major Crimes will keep Cruz busy this year, although he’ll try to squeeze in time to enjoy his hobbies of riding and building motorcycles, cars and RVs, and playing golf. And Cruz would eventually love to work in Hollywood South. “I’ve been to New Orleans for Mardi Gras — what a great town!” Cruz says. I love the history, the architecture, and the music is insane. And I love eating! I love the food. I’m one of those guys that will try anything because I love all types of different food, so I went crazy down there with étouffée and gumbo – oh my God! I’d love to film down there eventually. In the spirit of New Orleans, I just feel very blessed.”