With Josh Hill, the Saints may have discovered another special talent at tight end. 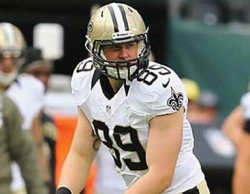 As the New Orleans Saints’ 2015 recalibration continued apace this spring, all fans gasped as Jimmy Graham — the quintessential “painful warrior famous for fight, after a thousand victories,” — departed for colder climes (and perhaps more meager targets in rival Seattle), and were left to ponder the future of their offense. Also departed were Kenny Stills, Pierre Thomas and Travaris Cadet, and, altogether rather suddenly, four of the top six receivers from 2014 were gone. Whither the 314 targets, which amounted to almost half of Drew Brees’ attempts?

It might be worth remembering that head coach Sean Payton is known for kneading the wrinkles in his offense until they generate small miracles. His next such project might be Josh Hill, who first appeared with the Saints as an undrafted free agent signed out of Idaho State in 2013. It would be inappropriate to suggest that Hill could match Graham, but he might be ready to take a leap forward this year.

Emerging from college, where he caught 118 passes in his final 22 games, Hill had an impressive Pro Day — but he missed the combine, which meant that he showed enough to grab the attention of enterprising Coach Payton, yet he remained unnoticed enough with the rest of the league that he went undrafted. At his Pro Day in 2013, Hill’s burst off the line was most evident as his 20-yard dash time (2.65) was equivalent to that of Graham’s (2.66) when he came out of Miami.

Arguably, Hill was a typical “move” (pass catching) tight end at that time, who still needed work to achieve pro-level size and blocking skills. In the interim since arriving in New Orleans, Hill has seen his workload build in 2014 to 293 snaps on offense, including 210 as a blocker, with 14 receptions for 176 yards, and 5 touchdowns on 20 targets in the remaining 83 snaps. And he earned praise as a key special-teams leader, as he led that squad in tackles.

Payton has been effusive in his praise for Hill in past press conferences — that indeed has garnered notice, and the progression has been obvious. Last August, Payton said, “One of the things about him though were all of his measurables were very comparable to mid- to high-draft picks, and so, fortunately, we got a player who came in and ran exceptionally well, tested well, and then the ability to play in special teams, a role in all four units is a big deal, especially at tight end. He is a quick study. I think he has very good hands, and I think that he is a player that keeps getting better. He is smart.” At the end of the year’s press conference, Payton heaped on more compliments, saying, “When you get a tight end that potentially is going to be your special teams’ player of the year, that is a good thing. He is one of those players had he went to the combine, he probably would have been drafted. If you just took his numbers and plugged them in — height, weight, speed, vertical jump, broad jump, production — they are pretty impressive. He was a great addition for us, a great sign for us a couple of years ago.”

Finally, by this March, Payton continued in his effusiveness, and described in an anecdote how the Saints decided to pursue Hill over perhaps other players who were likely to be drafted: “We were doing this study last year with the draft class, and they were talking about some of the top picks at tight end,” he said. “So the scouts had the board, and this is human nature, but the scout would see ‘free-agent tight end,’ and kind of say, ‘Well, he’ll come in Year 1 and probably beat out Josh Hill.’ And I’m like, ‘He will?’ I said, ‘Well, let’s throw the numbers up on the board with their measurables.’ And all of a sudden, Josh Hill, you look at a 38-inch vertical jump, he’s an 11 broad [jump], three-cone, whatever. And the comparables to the top tight ends in the draft a year ago, I said, ‘In every category this guy’s better.’ There’s this perception — we’re the same way as coaches, if we acquire someone as a free agent after the draft. But when you really look at the film and watch him, if I told you this guy was our third-round draft pick, you’d be excited now. We’ve just got to get that little jersey off his back that says, ‘I came here as a free agent.’ I think we feel like he’s got a bright future.”

It would be too much to ask or expect Hill to truly replace Graham on the field, and, in reality, that job might fall to a committee, also including veteran Benjamin Watson, who has been consistent, dependable and versatile. Since players receiving nearly half of Bree’s targets (and also nearly half of his touchdowns) have left, there is room for both Watson and Hill to grow. However, unless a tight end is added high in the draft, it is most likely that the Saints will be relying upon Hill more frequently for his more dynamic athleticism and downfield ability. Hill’s real promise might be in the end zone. Despite his relatively few snaps and catches, Hill still finished 2014 tied with Marques Colston for the second most touchdown receptions on the team, (with five), and that could even double this year. Given his statements about his excitement about Hill’s physical capabilities, and considering how Payton took extra efforts to work Hill into game plans and key situations the last two years, it would not be surprising at all to see Hill emerge as a star in 2015.