The Spice of Life: Lois Comeaux

“One bite of food with this dip will have you saying Wow Wee!” is just one of the many rave reviews customers have shared online, in print and in person about Wow Wee Dipping Sauce. 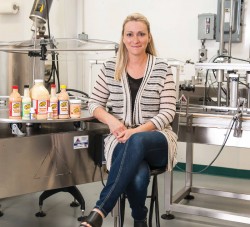 Wow Wee creator Lois Comeaux describes the unique sauce as a “great all-around sauce that can be used to enhance any food,” although it is widely used to accompany boiled crawfish.

Making and bottling her own sauce has always been a “God-given desire” for Lois, who founded Wow Wee Dipping Sauce along with her husband, Charlie Comeaux, in 2011. The couple has four children together, and Lois has always enjoyed making sauces and dips for gatherings and family meals.

“Every household where I’m from makes a sauce like this,” says Lois, “so I figured, why not bottle it?”

The Wow Wee recipe is based on the in-demand sauce that Lois would always bring to crawfish boils, consisting primarily of mayonnaise, ketchup, mustard and creole seasonings. The sauce features mostly all-natural ingredients and minimal additives, aside from what is necessary for shelf life and sustainability.

The sauce is very versatile. “Many people use it as an alternative to ketchup,” Lois says. Though it is most widely used with boiled seafood, Wow Wee is also great for grilling, mixed in with dips, as a base for deviled eggs, as a dressing on salad and even as a spread on sandwiches. Lois’ son is particularly partial to Wow Wee on a turkey sandwich.

Today, Wow Wee makes, bottles and distributes its dipping sauce out of its Cut Off, Louisiana, location. Lois and Charlie co-own the business along with Lois’ aunt and uncle, Celeste and Tony Griffin.

“We’re a family owned and operated business, which is such a blessing,” Lois says. Both her brother and brother-in-law are also involved in business operations, but Lois is the only family member who is a full-time employee of the company.

Lois’ uncle Tony serves as Wow Wee’s head salesman, but, at the beginning, Lois was the one putting in the miles to expand Wow Wee’s distribution.

Though it just launched on Good Friday, the new Southwest Chip Dip has already received a great response from customers. It is currently available in some Rouses Supermarkets locations, and it will be appearing in more grocery stores soon. Another versatile condiment, the Southwest Chip Dip can also be used for boiled seafood, but, as its name implies, Lois says it really is best with chips. “That’s its calling,” Lois laughs. “It’s great with chips or even a vegetable platter!”

With the launch of this latest product, Lois is proud of her family’s hard work, but also thankful and humbled — taking each day at a time as she continues to grow her family’s business. “We are just putting one foot in front of the other and going wherever God leads us,” she says.

647
previous Family Core: Maggie Doussan
next When the Mission Meets the Man