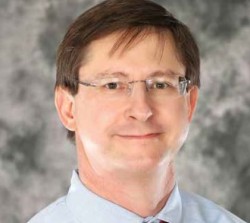 As people continue to live longer, the prevalence of neurological disorders, like Alzheimer’s disease, has been increasing over time. Today, approximately 35.6 million people worldwide have Alzheimer’s — and the annual number of cases is expected to more than double by the midpoint of the 21st century. As scientists continue to search for a cure, physicians like Dr. Archibald L. Melcher, III help families who are affected by the degenerative memory disorder cope with daily life.

Dr. Melcher grew up in Metairie; he attended the University of New Orleans for undergrad and received his Doctorate from Louisiana State University School of Medicine. Dr. Melcher was a chief resident in the Neurology Department at Tulane Medical Center, and he says he was drawn to the field of neurology because it offers a combination of human anatomy and internal medicine — two fields that have always interested him. He also had some family members who were diagnosed with neurological issues at the time, and he wanted to understand more about their conditions. As a result, much of Dr. Melcher’s practice today is devoted to his patients’ families and the effects that neurological issues have on their relationships.

“When I treat a patient, rarely am I just treating the individual; I’m treating the entire family,” Dr. Melcher says. “I sort of become that person’s primary care physician once they come to see me, and I give loved ones advice for how to handle that patient during and after treatment.”

Many of the issues that Dr. Melcher treats each day through therapy and medicine can also benefit from living a healthy lifestyle, he says.

“A good diet and regular exercise is important for reducing the frequency of migraines and even preventing or delaying the onset of Alzheimer’s,” he explains. “While we don’t yet have a cure for Alzheimer’s, keeping your mind stimulated by reading each day — and getting outside and being active in your community — can keep your mind and your social skills sharp!”

While Alzheimer’s manifests itself differently during different stages, Dr. Melcher says to look for signs of memory loss, confusion during the evening and getting lost during the day. He advises to avoid caffeine and daytime naps, to discourage night wakefulness. According to Dr. Melcher, signs of memory disorders should be discussed with a physician who will run tests to exclude other causes, such as brain tumor, stroke, vitamin deficiencies or hormone abnormalities. If caught early enough, the progression of Alzheimer’s can be slowed by medicines, such as Namenda and Aricept.

Although neurological diseases can be debilitating, Dr. Melcher experiences firsthand the way that strong family support can have a positive impact on a patient’s wellbeing and recovery.

“One of the best parts of my day is meeting my patients’ families and working with them to develop treatment options that fit their needs,” Dr. Melcher says.