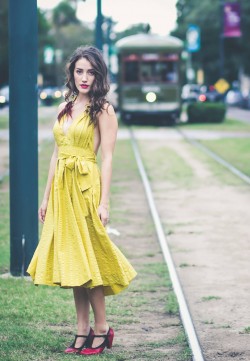 Teri Wyble’s acting career is about to get kicked up another couple of rungs on the Hollywood ladder. The local actress will appear on the silver screen in this summer’s highly anticipated blockbuster hit, Terminator Genisys — a reboot of the Terminator series — that will include Arnold Schwarzenegger reprising his role as the famed killing machine that forged a permanent spot in American film history. And although she is increasingly finding herself in demand in the wild and highly competitive world of lights, cameras and action, Wyble remains modest, affable and true to her Louisiana small-town sensibility.

Growing up in Arnaudville, located about half an hour outside of Lafayette, Wyble spent most of her life as a dancer. She graduated in 2008 from the University of Louisiana at Lafayette with a BFA in performing arts and dance. “I like to give credit to my little town of Arnaudville, instead of just saying I’m from Lafayette (the closest big town), and Lafayette is also home to me,” Wyble says. “Now that I’ve been in New Orleans for about seven years, it’s becoming my home as well. I’m a very Louisiana girl.”

Wyble’s deep-seated love of the stage led her into acting, and, after college, she and her boyfriend, fellow actor Hunter Burke, moved to New Orleans to pursue work in film and television. “We wanted to be closer to the Hollywood South scene and get into the thick of it, and we love it here,” Wyble says. “I definitely feel lucky to be able to stay here and do something I love, and still be close to my family. I’m okay with going on short-term trips to L.A., but I’m too much of a family girl to move away.”

The first big break in Wyble’s career came with one of her very first speaking roles in the 2012 action/fantasy/horror film Abraham Lincoln: Vampire Hunter, which was shot in several locations in Louisiana (including New Orleans). Wyble got booked on the spot at the audition to play the wife of Dominic Cooper’s character Henry Sturges, and she got to smooch the handsome lead. “It was shot at Oak Alley Plantation, and that was an awesome couple of days,” Wyble says. “It was a period piece, and I wore a corset; the weather was gorgeous. I had the most amazing time on set. I played Henry’s loving wife, and they’re loving on each other in a carriage, and something happens to the carriage and I later try to save the day, but she’s this pretty little girl with her hair done in this beautiful dress, and she’s trying her best to save her husband in a terrible situation, and it leads to her demise of course,” laughs Wyble, regarding her character’s death scene that wasn’t originally written into the script. “But it was wonderful! I knew that I wanted to keep doing this kind of work. Everyone has to start from square one — doing extra and background work, or doing one-liners — and I knew that opportunity might open some doors for me.”

Indeed, the doors continued to swing open for Wyble. She found steady work, appearing on hit shows, such as ABC’s Nashville, and then she nabbed the role of Jenny Ladouceur in the 2014 sports drama When the Game Stands Tall, another film shot in New Orleans. “I had a short couple of days on set in one scene where I played Jim Caviezel and Laura Dern’s daughter, and I don’t know if you can get better movie parents than that,” Wyble says. “Jim played Jesus in The Passion of the Christ and Laura Dern was in Jurassic Park — one of my favorite movies when I was growing up. Jim cracked jokes and was really sweet. It was a short-lived but good experience. I felt lucky.”

Wyble’s lucky streak kept on rolling, and, in 2014, she starred as police officer Shepherd in Season 5 of AMC’s zombie apocalypse turned mega-cult classic series The Walking Dead, as a survivor of the outbreak. “It was mind blowing,” Wyble says. “I knew how big the show was. I thought I was auditioning for one episode, but it was three! I had the best time on set; people on the show say it’s really like a family, and that’s true. I can’t say enough wonderful things about Andrew Lincoln, who plays [main character/sheriff’s deputy] Rick Grimes and has been a constant since day one. He always makes it a point to say, ‘Hello,’ or tell you that you’re doing a good job. It was wonderful!”

Terminator Genisys and all its plot twists on the original Terminator franchise arrives in theaters on July 1, and will feature Emilia Clarke from Game of Thrones as Sarah Connor and Jason Clarke from Zero Dark Thirty and Dawn of the Planet of the Apes as John Connor. Wyble was ecstatic to be cast in the tough-girl role of Mariam, a soldier in John Connor’s smaller inner circle of the human resistance that fights the machines.

“In recent times, I just kind of put it out into the world and said it out loud that I wanted more bad-ass roles,” Wyble says. “I didn’t want to always be the arm candy or the cute waitress. I wanted more female empowerment roles with some substance. And I feel that both The Walking Dead and Terminator Genisys really helped my dream come true.” Another perk is that Wyble got to meet Hollywood’s most notorious cyborg for the read-though of the script before shooting started. “It was pretty surreal being in the room with Arnold, saying some of his famous lines. Not many people can say they’ve done that,” Wyble laughs. “It was pretty cool — definitely one for the journal!”

Like many who find their way to New Orleans, Wyble has fallen under the city’s undeniable and often unbreakable spell. “New Orleans has something about it,” she says. “I haven’t traveled the world, but, I have been to many places, and not many have this little magic that New Orleans has. I think that’s what grabs people, and keeps them coming back and makes them move here even though we’re a city under sea level,” Wyble laughs. “People just want to be here and be in that energy, because it does something to you.”

Living around the Faubourg Marigny puts Wyble in the quiet neighborhood setting she desires, yet it keeps her close to the action of Frenchman Street and the French Quarter. “I’m not a big-city girl, so the Marigny works for me,” she says. “And we’re kind of in our own little world here. One of my favorite restaurants is Yuki Izakaya on Frenchmen — I can’t stop going there! My boyfriend and I are such big foodies. I’m not picky; I’ll eat anything and everything, and I love trying different food. I’ve made a huge list of places we’ve tried and places we want to try. I’m from Cajun Country, so I know all about good food. New Orleans is different — it’s more Creole, but it does have Cajun-ish stuff. Yeah, I’m just eating my way through the city.”

Thanks to her cute little rescue dog Finn, Wyble frequents NOLA City Bark when she can. “I am a huge animal lover, and I love my dog so much,” she says. “My dog is my baby, and part of my family and is a complete momma’s boy. I adopted him a couple of years ago from Yelp! Baton Rouge. It was so hard not to come home with more than one dog! My family always had cats, but, in high school, I developed allergies to them — although I still love cats. Now I’m a total dog person; I’m one of those people who has hair all over my car and my clothes all the time, and I’m okay with it,” Wyble laughs. “He’s just my life, and he has changed my life.”

Wyble has become more involved in animal activism since rescuing Finn, and, to show her support for animals in shelters, the caring and compassionate actress has volunteered to be a celebrity co-chair for the Louisiana SPCA’s 37th Annual Howling Success Patron Party & Gala, taking place Nov. 7 at the Hyatt Regency New Orleans.

“After rescuing my dog Finn from a shelter years ago, my heart finally feels a burning passion to pursue a life goal of helping find good homes for all shelter animals,” Wyble says. “I’ve always heard that we need to be a voice for the animals, and I want to help stress the importance of heart worm prevention, and spaying and neutering pets, because it helps limit the amount of strays we have on the streets. Nothing makes me happier than being a part of the Louisiana SPCA’s Howling Success! If fame and acknowledgment automatically come with my career choice, then I choose to use it for the good. My heart is with the animals.”

7.98K
previous When the Mission Meets the Man
next Fighting with FIYA