Children often teach us the most important lessons of all. 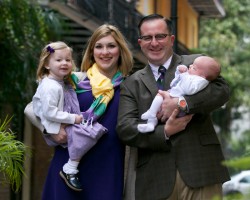 Raising a child in New Orleans, I find myself learning life lessons from somewhat unexpected circumstances. There was the time I learned about sharing when I had to borrow wipes from a stranger along the parade route, because I managed to remember to bring a beer but not the diaper kit. There was also the time I learned about the importance of teamwork when a few kind festival-goers helped to get our stroller through the mud and back onto the track. Then there was the time my daughter taught me about finding joy in something as simple as a mud puddle.

It was a typical summer day in New Orleans. The kind of lazy Saturday that starts with a leisurely walk before the heat reaches its peak. It was early June when the earth under our feet had yet to be scorched and the gardens we came upon were still blooming. The colors and smells of the blossoms were a wonderland for the developing senses of a toddler. Just as we marveled at the deep red hue of a hibiscus and enjoyed the scent of rosemary that lingered in the air around us, the sky started changing.

As quickly as the sun had risen, so had it disappeared behind a host of ominous clouds. We jogged home in just enough time to escape the impending downpour. It was the perfect setting for a long summertime nap. The sky was dark and the sound of the rain gently tapping on the nursery windows provided a peaceful atmosphere that could not be otherwise manufactured.

Like all New Orleans thunderstorms, this one left as rapidly as it arrived. Unlike other places that revel in the cool air that follows summer showers, here it only seems to get hotter. I knew the steamy temperatures that would keep any right-minded adult indoors would be no match for my waking child.

She, clad in her best summer seersucker, and I were off to find adventure. We landed at the Alma Peters Park in Uptown. It is a quaint little peninsula on Annunciation Street, nestled between State and Eleonore streets — a place where neighbors leave the outgrown toys of their children’s past. I always imagine the joy these toys once brought to a child as they were unwrapped on a birthday or at Christmas. The once bright red Radio Flyer has faded. Its bell no longer dings. The little toy house is missing its phone, and the door bell hangs on by a thread. To an adult, it would be more aptly called the playground of misfit toys. To our toddler, it is the greatest place on earth. Here, she bounds from toy to toy. She rides “her” bike from one plastic house to another shouting, “ding, ding, ding.” She needs no bell; her imagination fixes anything that is broken.

That day at Alma Peters Park, all of her favorite things showed signs of the rain storm that had just passed. The swings and slides had pooled water; the toy houses were splattered with mud; and the bicycles were creakier than normal. A look of disappointment appeared on her face before she spotted the one thing I was praying she’d avoid — a giant mud puddle.

Before I could stop her, she took off toward the puddle and jumped in with the confidence of an Olympic diver. As I was about to shout, “No,” I was interrupted by the sound of her laughter. It literally stopped me in my tracks, and I stepped back and watched her play unabashedly in this dirty, filthy mud puddle. It was the kind of laughter that resonates in the air because it comes from the deepest parts of a child’s soul where their joy lives. How can something so simple create feelings so deep that they move you?

And there, on the playground of misfit toys, my daughter taught me that real happiness is not derived from the things that surround us but from the smallest moments that are too often missed.

760
previous Downtown Living: May 2015
next Of A Generation