“Therefore, take up the whole armor of God, that you may be able to withstand in the evil day, and having done all, to stand firm.” 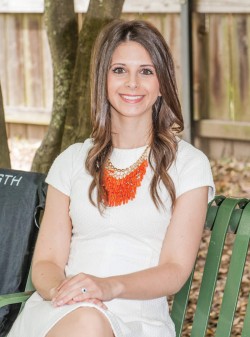 During a short yet intense battle with a rare form of testicular cancer, Jonathan Avitia drew strength from this verse from Ephesians chapter 6. Today, to preserve and honor his memory, Jonathan’s wife Lindsey Dotson Avitia uses it as inspiration for her FIYA Fighter Tee project.

Fight In Your Own Armor, or FIYA, is a collection of shirts that are easy for patients to wear while in the hospital undergoing treatment. Designed to fit like a favorite t-shirt, the FIYA Fighter Tee is a welcome replacement for revealing and awkward hospital gowns. It is made of a soft, lightweight, moisture-wicking bamboo/cotton blend, and it has discreet plastic snaps for easy on-and-off and for inserting an IV or catheter.

The idea for the shirts came when Jonathan was admitted to MD Anderson Cancer Center in 2011. At that time, he had just been handed a stage 4 diagnosis of a rare form of testicular cancer, referred to as a extragonadal germ cell tumor, and he would have to immediately begin treatment.

“As the nurse handed him the hospital gown, he looked up and said, ‘I’m not wearing that,’” Lindsey recalls. “We just left everything we had in New Orleans — our homes, our business, our life, our normalcy — and the thought of losing his right to wear his own clothes was too much.”

Although Jonathan agreed to wear the gown initially, he quickly sketched a design that would address the needs and benefits of the gown, yet allow him to look and feel like himself. Within a few weeks, they had several shirts made, which restored some sense of normalcy. Lindsey says the nurses and doctors loved the way the design pleased patients and made their jobs easier.

“It was evident the difference the shirts made to Jonathan’s confidence and comfort,” Lindsey says, “and he knew that we had to share this with others.”

Jonathan passed away while fighting on March 27, 2013. As his wife, Lindsey sees sharing FIYA as her calling, and, on May 16, 2015, she launched a 30-day Kickstarter campaign to help fund the production. In the initial phase, FIYA will offer two styles of the original IV-accessible shirt — a unisex crew neck, which mimics a basic t-shirt (available in gray, black and blue) and a slimmer-cut women’s v-neck (available in gray and coral). Standard tees are also available for friends and family to wear. Lindsey’s wish is that this Kickstarter campaign adds spark to Jonathan’s idea.

“This is where FIYA starts, not where it ends,” Lindsey says. “Next, we want to create children’s Fighter Tees, then active wear and loungewear lines — the proceeds of which would hopefully go to fund more Fighter Tees.”

As a social entrepreneurship, FIYA’s goal is to help others through proceeds. A portion of all profits from FIYA apparel purchases go to patient-benefiting charities and to manufacture Fighter Tees that will be donated to patients.

“Ideally, no one who needs these shirts will have to buy them,” Lindsey explains. “Our dream is to donate these shirts to patients across the U.S. and beyond.”

Although originally designed to help those undergoing inpatient treatments, Lindsey hopes that FIYA can ultimately “catch on” and become the symbol of a fight against any illness, disease or unjust cause.

“FIYA is about hope, encouragement and support,” Lindsey says. “We don’t need a common problem to unite us; we need only the will to fight.” setfiya.com