Ric Hopper was “bitten by the wine bug” during a dinner party with his parents when he was a teenager. The bottle was a 1959 Domaine Comte de Vogue Musigny. 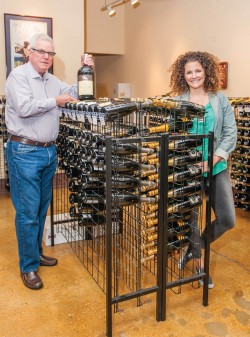 “One sip and I was hooked,” Hopper recalls one afternoon while sitting in the tasting room of his Magazine Street wine shop, Hopper’s Carte des Vins. Old World wine, particularly French Burgundy, continues to be Hopper’s niche market and favorite wine of choice.

Hopper, who grew up in New York, was not always in the wine business. He worked for Air France in the 1970s. International air travel suited Hopper’s lifestyle and “furthered his interest in wine,” taking him to wine meccas like France, Italy and California. Although Americans’ interest in wine was growing at the time, the amount of available information was still limited.

“It was a time of no Internet, no cell phones, no Robert Parker,” says Hopper, who purchased a 1973 University of California, Davis textbook on table wine during one of his trips to California. Over time, he read it to gain a better understanding of — and appreciation for — winemaking. He still has that textbook sitting on a bookshelf in his shop. His passion grew as he continued to learn by frequenting, and even working at, a wine shop in Manhattan.

In March 1977, Air France transferred Hopper to New Orleans. After a few years with the airline, followed by a few years owning his own travel agency, Hopper was able to turn his hobby into a career. He began working at Martin Wine Cellar’s original Baronne Street location in 1986. The top-selling Burgundy producers in New Orleans during that time were big names like Joseph Drouhin, Louis Latour and Bouchard, and, while he enjoyed those producers, Hopper wanted to further expand his customers’ wine-drinking horizons and introduce some lesser-known names. His enthusiasm for and unique knowledge of Old World wines made Hopper quite popular with a small yet zealous group of Burgundy buyers, and Hopper was able to develop a niche that ultimately drove him to open his own shop — Hopper’s Wines & Spirits — in Uptown Square in July 2003.

In June 2011, the shop moved to its current storefront on the 5000 block of Magazine Street, across from Whole Foods Market, and, while the focus is still on Old World varietals, Hopper’s Carte des Vins offers an extensive selection with options suitable for every budget.

“It’s fun and exciting for me to pass on this knowledge to my customers,” says Hopper, who says customers often come in explaining they don’t know much about wine, seeking his recommendations. His top picks for summer? “Rosé from Provence, served chilled,” he says. “We are seeing a renaissance in pink wines lately, and we carry between 10 and 12 different rosé options during the summer months.”

Joining Hopper is Sara Kavanaugh, who previously served as Assistant Food and Beverage Director and Sommelier at the Windsor Court Hotel’s Grill Room and Polo Lounge. “Sara is formally trained in wine and culinary arts,” Hopper says. “Her impressive background and rich experience make her invaluable to the shop. She has a great palate, and she brings a sense of youthfulness to our store that the customers enjoy and advice they can appreciate. Under her direction, we have made some exciting additions to our inventory, and we can’t wait to help our customers add them to their collections!”

Hopper’s Carte des Vins offers free tastings on Saturday afternoons from 2 to 5 pm, featuring distinctive styles of wine that are selected for their reasonable price point, ability to pair well with a variety of foods and their seasonality. hopperscartedesvins.com

606
previous Healthy Eating in the Big Easy
next Idina Menzel: All the World's a Stage