There are apps available today to make us healthier, smarter, more organized, more informed and more connected. Whatever you need, you guessed it, there’s an app for that. And thanks to Koby Sackey and Dennis Bourn, now there is even an app to make us feel safer! 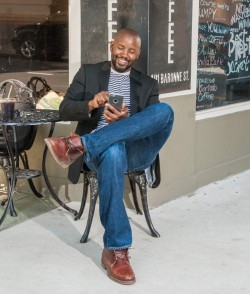 Dot by Caredots is an app that allows you to alert close friends and family when feeling unsafe.

“We created Dot with the simple goal of making our cities safer,” explains Sackey, CEO of Caredots, who has experience in architecture, design and Website development. “There’s never been a platform that allows people to work together in the name of safety. Users can pinpoint in real time where they have felt unsafe. Not only does it help to improve our city, it does so without perpetuating stereotypes.”

Sackey met Dot’s co-creator Bourn, founder of Bourn Technology, during the 2013 New Orleans Startup Weekend. Bourn pointed out that none of the startups were addressing the key problem of safety and crime in the city. Sackey, who had been working on tourism apps at the time, agreed that this was a niche that needed to be filled. Dot officially launched in the App Store this past February.

Dot users register with their cell phone number, email address and name, then add three personal contacts, which must be approved. The simple app consists of three buttons — green, blue and red. Pressing the green button notifies contacts that you are safe. The blue button messages contacts with your location, making Dot a helpful tool for parents of young drivers. Press the red button when feeling unsafe to notify contacts of your location and encourage them to check in. This also leaves a dot on a public map so other users can see that someone felt unsafe in that area.

“This app is not a replacement for 911,” Sackey cautions. “What we’re doing is quality of life reporting in an effort to make the city safer. If you see a suspicious vehicle in your neighborhood, for example, or are on a street with several streetlights out, you can dot that area. Dot uses the location of each safety alert and repurposes the data for use in criminal investigations, crime-zone analysis and development.”

Sackey is quick to point out that Dot does not track a user’s movement or activity. “We are very concerned with protecting peoples’ privacy,” Sackey says, “and Dot is opt-in only. It doesn’t allow anyone to track someone, it just allows you to send an alert to share your current location. You’re not tracked after dotting.”

Sackey says that although users’ identities are anonymous, whenever someone shares his location, it is collected in a public database. Dot also has a function that notifies you when wandering into an area with high-crime reports or an excessive amount of red dots.

“The information collected is for the greater good — it’s valuable to law enforcement and could end up saving your life,” says Sackey, noting that although it’s only in the beginning stages, he and Bourn are already thinking ahead to version 2.0.

“We want to allow for greater communication between users and allow people to specify the reasons they dotted a certain area,” Sackey explains. “We want to expand usage, especially in urban cities in the United States and Latin America that have safety and safety-conception concerns. As we grow, Dennis and I are trying to learn what our users want, and we are working with civic leaders to hopefully impact crime rates in certain areas.”

Dot could also become a valuable tool during hurricanes, as it uses very little data and does not count against text messages or minutes on a user’s data plan.

“Our end goal is to make it easier for people to understand their environment,” Sackey says. “If you choose to wander off the beaten path, you’ll have information literally at your fingertips that allows you to feel safer about doing so. Dot is a way for all of us to work together to keep our cities safe.”

Dot is free, available in the App Store and Google Play. caredots.com

758
previous Idina Menzel: All the World's a Stage
next Shirley Herstein: Piano Woman