Shirley Herstein’s Steinway & Sons piano has been with her for more than six decades. From her childhood home in Philadelphia, it has traveled with her across the country as she followed her husband, Harvey, during a stint with the Navy, before settling in New Orleans, where it has survived — just barely — multiple hurricanes. 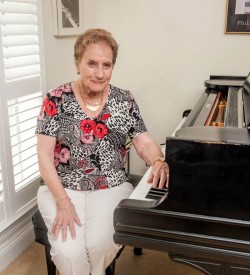 “It was in terrible shape after Katrina, but Hall Piano restored it and did a wonderful job,” explains Shirley, a local piano teacher who is understandably extremely attached to her Steinway Grand Piano 5’10” series from the 1950s.

Shirley grew up in Philadelphia and has loved playing the piano ever since she can remember. Originally, her parents got her a “little cheap upright,” but Shirley says, once they realized she had a natural talent, they bought her a nicer model. And then, when she was 12 years old, they purchased the Steinway model that she has with her today — more than 60 years later. When she was a teenager, she enrolled in the Philadelphia Conservatory of Music, which is where she continued to study through college, eventually graduating with a bachelor’s degree in music and music pedagogy.

“At that time, the Conservatory shared faculty with Juilliard,” Shirley says, “and teachers would come in three days per week. I was able to live at home and still study under some of the most talented faculty in the country, so it was the best of both worlds.”

Shirley began teaching piano in college, through the Conservatory’s Students of the Students curriculum, and, since then, she has shared her talents and love of music with hundreds of students. In 1968, her husband’s career brought the Hersteins to New Orleans. Shirley continued her lessons, offering them daily out of her home. Prior to Hurricane Katrina, Shirley taught at Loyola University’s College of Music and Fine Arts — in addition to offering private lessons — and today, she is the piano teacher at Ridgewood Preparatory School.

Shirley teaches beginning through advanced students (starting as young as 6 years old), and she also teaches some adult students. She has had the pleasure of teaching some of New Orleans’ finest artists, including Jon Batiste, who was recently revealed as the future bandleader on The Late Show with Stephen Colbert, premiering on CBS in September.
“He was naturally gifted, with no formal training,” recalls Shirley, who started teaching Batiste when he was 10 years old. “Jonathan played strictly by ear. You could hear the brilliance in his playing.”

Batiste practiced with Shirley on Saturdays for six years, while also attending New Orleans Center for Creative Arts, before enrolling at The Juilliard School. He was a friend of another one of Shirley’s students, Nick Sanders of the Nick Sanders Trio, while the two were attending the Louis “Satchmo” Armstrong Summer Jazz Camp. Shirley says that the 2014 New Orleans Jazz & Heritage Festival was a special treat, when she got to hear both of her students perform live on stage in their own shows. Today, Batiste’s nephew takes lessons from Shirley as well.

When she is not teaching piano lessons, Shirley and her husband enjoy all of the live music that the city has to offer. The two especially love Snug Harbor Jazz Bistro on Frenchmen Street, but they are also season-ticket holders for the Louisiana Philharmonic Orchestra and Broadway in New Orleans. They are also mainstays at New Orleans Saints and Pelicans games.

Though keeping up with daily lessons and a busy social calendar can be exhausting, Shirley loves what she does. It is this passion that has driven her since she was a young girl, and she doesn’t show signs of stopping. When asked about plans for retirement Shirley simply replies, “Maybe next year!” For lessons, call (504) 228-9298.