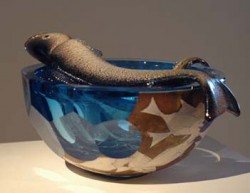 The nascent art scene in St. Bernard Parish is steadily growing, attracting local and nationally recognized artists. Mitch Gaudet, the owner of Studio Inferno in the historic Old Arabi section of St. Bernard Parish, foresees a time not too far removed from the present when this cottage industry might be seen as a vital adjunct to the larger, more established art district in Orleans Parish proper.

One of his featured artists is the internationally renowned Japanese glass-maker Hiroshi Yamano. Though almost all of the artistic training Yamano received was in the United States, his glass art is undeniably imbued with Japanese sensibilities: clean, efficient lines; simple elegance; and a fluidity that gives his nature-inspired pieces the appearance of subtle movement.

A recurring motif throughout Yamano’s art is the fish. He likens the fish, in its aquatic wanderings to his own artistic endeavors. The fish, he claims, is constantly moving with limited visibility — and just beyond its seascape is another world, then another horizon, then another world altogether. 6601 St. Claude Ave., (504) 945-1878, facebook.com/infernonola
Etched in Memory: Local artist George Schmidt portrays a devotion to historical drama.

Upon stepping into George Schmidt Gallery, one painting instantly catches the eye. It’s a large painting of Cicero defending Caecina. It’s ancient history — ancient Roman history to be exact — and it’s a milieu in which Schmidt thrives as an archetype of a dying breed: Schmidt is a Renaissance man, as much at ease discussing ancient Rome, early New Orleans jazz and the politics of the Huey Long era.

Most of Schmidt’s historical paintings and etchings are mini-epics, steeped in historical drama unfolding before us. Schmidt recognizes that he paints for an audience whose sensibilities are similar to his, which is why many of his paintings are commissioned works.

Quoting Leon Battista Alberti, a Florentine artist noted for writing the first “modern” work on painting, Schmidt says, “painting exists so that the dead should live again and the distant brought near,” and Schmidt takes this quote seriously … and literally. The resurrected personages in his historical paintings are not only the Ciceros and Caecinas of history, but his barber (Cicero), friends and acquaintances he’s used as models in his pictures … some of whom are also long deceased.

Though Schmidt’s paintings are engaging, it is his etchings that are truly the mark of his craftsmanship; and though his etchings are almost all based on his paintings, they could each stand alone as works of art.

Schmidt’s gallery exudes a warmth lacking in most modern galleries. When most galleries strive for post-modern minimalism, his paintings teem with people in all manner of repose: jostling, yelling, posturing … all in the burnt sienna and burnt umber that he loves and, which he says, “are the very colors of the earth.” 626 Julia St., (504) 592-0206, georgeschmidt.com

When George Schmidt isn’t painting, it’s likely you can find him playing banjo with The New Leviathan Oriental Fox-Trot Orchestra. The Orchestra has been performing intermittently since it was founded in 1972, with a continuous turnover of personnel. Its repertoire begins in the 1890s and, according to Schmidt, ends in the 1930s. The repertoire acts as an answer to the pervasive intrusion of the music industry into every facet of music, even its appropriation of the folk revival of the 1960s.

The Orchestra is fond of Ragtime, Dixieland jazz and the lesser known Tin Pan Alley composers of New Orleans, but naming each member of the band is a tall order for Schmidt, since the band at times includes 18 different pieces played by 18 different members who rotate constantly. One of the more prominent members of the Orchestra at one time was Bobby Skinner, famed for his use of the theremin. Skinner has played with the Orchestra, as well as the Louisiana Philharmonic Orchestra, and has almost single-handedly brought the theremin legitimacy as a musical instrument.

In many of their performances (you can find them on YouTube and on their own radio station at jango.com) George Schmidt’s nasal tenor can be heard belting out standards like “Jelly Roll.” In another segment online, Schmidt introduces his banjo as the loudest banjo around, in between “The International Rag” and “The Sheik of Araby.”

By reverting to a time before music was big business, and record companies owned the airwaves, The New Leviathan Fox-Trot Orchestra has found gold in the long forgotten standards of Ragtime, the precursor to jazz, and Dixieland, another progenitor of modern jazz. What they have discovered, or uncovered, is the sheer fun of what music should be. facebook.com/newleviathan

228
previous Summer and Sno-balls
next Pacific and Powerful