Home IN THIS ISSUE Pacific and Powerful
IN THIS ISSUE
SPORTS
June 30, 2015 Paul Wegmann 0 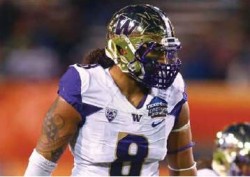 The storm of the 2014 New Orleans Saints season has finished brewing; the waters of its discord and disappointment have long finished roiling. The interim has brought a changing horizon, as defensive starters have departed and new promising players have landed. The Saints defensive success under Rob Ryan has been an up and down voyage — one season finishing a stellar fourth overall in total defense in the NFL, the other, in 2014, finishing second to last. In the often discussed 3-4 defensive alignment and alternating schemes that Ryan is known for, no position has greater emphasis than outside linebacker. Yet, at the eve of this year’s draft, that same position posed one of the team’s greatest needs.

To create ballast, the Saints crafted their most intensive and bountiful defensive draft since 1981 (the last time six defensive players were taken in the first seven rounds, including NFL Hall of Famer Rickey Jackson and Saints greats Russell Gary and Frank Warren), as they netted a catch of six defenders, including three linebackers (Stephone Anthony, Davis Tull and Hau’oli “Hau” Kikaha). From this crew, Kikaha has emerged as a future star who may just guide the defense of the future.

As a senior for the University of Washington Huskies in 2014, Kikaha led the nation in sacks (19) and tackles-for-loss yards (139); he was second in the nation in tackles-for-loss (23); he set the Huskies’ all-time single-season sack record; and he was third in the nation in sacks the year before. Despite this, the Saints obtained Kikaha with the 44th overall pick, several spots after those players who were his nearest competitors, such as Vic Beasley (8th overall pick), Nate Orchard (19th) and Shane Ray (23rd). The 19 sacks are third most for a top-division player since 2000 after Terrell Suggs and Elvis Dumervil and, in addition to those two names, the list of past NCAA leaders in sacks also includes Dwight Freeney, Julius Peppers and Von Miller — again very lofty company.

Overall in his career, Kikaha played in 44 career games and was the Huskies’ all-time leader with 36 career sacks. He also tallied 206 tackles, 51.5 tackles for loss, six passes defended, seven forced fumbles and one fumble recovery — a remarkable haul in his four-year college career. He was also a unanimous first-team All-American and a two-time PAC-12 All-Academic team member, and he overcame the adversity of two ACL injuries affecting his left knee after his freshman year — showing yet again this Saints regime’s continuing focus on production, character and intelligence in its chosen players.

At six-foot-four-inches, 250 pounds, Kikaha could be one of the NFL’s impact rookies this year, especially considering that Ryan will likely place him in the role where he can best excel (rushing the quarterback). A past judo champion and wrestler, Kikaha should make his mark as an effective edge rusher where his quickness and active hands will give him an instant advantage over the league’s offensive linemen. Kikaha has described how these skills have helped him in edge rushing, stating, “The core fundamentals of those sports are based on balance, power and angles, and not to mention hand-fighting with judo and wrestling as well. All of those things go into what a pass rusher does, and practicing for over eight years has helped me develop all of those fundamentals that we translate on the football field.”

Perhaps Kikaha’s most noticeable athletic qualities include his non-stop motor, his burst at the line of scrimmage and getting to the quarterback or runner, and his flexibility; while his intangibles are off the charts, including extreme determination, relentlessness and nearly fanatical effort. Possible comparisons might ultimately be made to Anthony Barr in his rookie season and John Abraham over his career. As Sean Payton described him after the draft, “Hau has been highly productive. You get a crystal-clear vision right away; you know exactly what you’re getting with the player. He’s smart; he’s tough; there’s a passion to how he plays; you see it out here. … Hau’oli Kikaha was a guy that we spent time with — a lot of time with. He has great football DNA. He is tough. He is physical. We would check the box with pressure player in that he is someone that we feel like rushes the passer exceptionally well. Occasionally there are players that you hope you have a chance to coach; this guy would be that player for us.” The Saints appear to envision Kikaha as a “Sam,” an outside linebacker who plays on the strong side at the end of the line, specializing as a pass rusher on the edge to complement Junior Galette on the opposite side.

Kikaha’s personal background is also remarkable, as he described the strong family presence that has helped him throughout his career, right up until draft day. “Hundreds of family members … are outside playing loud music, and yelling and being happy,” he said. “I’m here at home, and I’m lucky to be at home. We kind of just gathered, not expecting this to happen really, and just relaxing, watching television, hoping for something cool to happen, and, sure enough, I got the call and everything was kind of a blur since then.”

Kikaha hails from Hawaii (Hau’ula, on O’ahu). The football tradition there is a proud one, and he now joins All-Pro and fellow Hawaiian, Max Unger, on the Saints roster. What’s clear is that that family love and support, pride, passion and love of the game have helped Kikaha overcome adversity and have now taken him thousands of miles to the Big Easy. It appears that the winds of fortune have shifted for the Saints defense as well, and local fans will likely be offering Kikaha a hearty “mahalo” in appreciation the first time they seem him play.