It’s Boo to You

Blaine Kern gives New Orleanians another parade, this one on Halloween 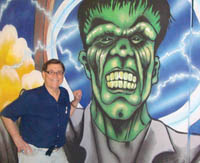 Midway through a phone conversation, Blaine Kern Sr. stops midsentence to ask “You’ve lived here awhile. You know who I am, right?” Right.

To New Orleanians, of course, Kern is Mr. Mardi Gras, float-builder extraordinaire and the maestro behind Mardi Gras World, the Algiers warehouse where many of the city’s floats are built and a visitor attraction in its own right. An eighth-generation Algerine, Kern got his start as a sign painter in the 1930s and founded Blaine Kern Artists in 1947, making his name synonymous with New Orleans Carnival for more than half a century.

Kern’s latest project is the Krewe of Boo, a group that will stage a Halloween parade every year to benefit the First Responders Fund, a charitable organization Kern organized in 2007. Monies raised from the Krewe of Boo will go into a First Responders Fund, providing five-figure homeowner loans to police, firefighters and EMS workers who buy or fix up a home in Orleans Parish. After five years, if they can show proof of continual employment with the city, the loans will be forgiven.

But the gift to the broader population is the parade itself, which may well turn into a new New Orleans tradition. In a city that loves to dress up, throw a party for any holiday and revel in its spooky history and reputation, the Krewe of Boo seems like a logical addition to the civic social calendar.

Why hasn’t New Orleans ever had a Halloween parade before? It seems like a natural.

There was one, some years ago, but it was not too successful. This is the official Halloween parade of the City of New Orleans. As you know, the reason we’re doing it is to support a foundation for first responders—police, firemen and EMS. Particularly, the police department; we’ve been losing police officers since Katrina, and the ones who are here are working in trailers and going home to trailers.

That’s why we founded the First Responders Fund. Actually, we founded the organization in 2007, but we didn’t have time to do a parade the first year. Instead, we did a haunted house, which placed second in a national contest. Well, we don’t take too kindly to second place, so we’re going to do it again and put New Orleans on the map nationally as a Halloween destination. And we’re going to make money for a good cause.

Tell me about some of the floats.

It won’t look like a regular Mardi Gras parade. We have two different types of floats: We have sculptured floats, which we haven’t seen in New Orleans before. We’ve built urns, angels, devils, witches, banshees, Dracula, Frankenstein, a ghost ship, the Mummy, black cats, ghosts. It’s Louisiana, so we have a Swamp Thing. Oh, and you know Anne Rice’s vampire character Lestat? Well, we have L’Yat.

Where’s it going to roll? East Bank or West Bank?

It starts at Napoleon and Tchoupitoulas, just like Bacchus, and follows that route all the way down St. Charles. It’s going to start at 5:15 and end at 8 or 8:30. This year, it’s on Friday, which is Halloween, but next year we want to do it the weekend before, so we can tape it and televise it around the country and make more money that way. We’re going to have a king and queen, and the krewe members will be on the floats throwing goblins and pumpkins and candies, so kids won’t even have to go trick-or-treating. You know the old Christopher Hemmeter building?

Right. Well, this parade is going to go down Convention Center Boulevard and make a left turn, and that’s where we’re going to have the after-party, at the new Blaine Kern Studios. The casino is magnificent, and next to it is the Robin Street Wharf—

So Mardi Gras World is moving into a new location on the East Bank? When will that happen?

It’ll be open by Halloween. We’re not leaving Algiers. It’s an expansion.

Blaine, how’d you get the idea for this?

My whole life has been parades and parties, as you know. Well, I do a haunted parade for Universal Studios in Florida, and a few years ago we did a benefit party in Algiers for the policeman Andres Gonzalez, who was shot here, and raised $175,000. That was around the time I found out that so many policemen were in need of so much help. Later on, [New Orleans city council member] Arnie Fielkow came over to look at my development, and he was the guy who gave me the idea, got me started thinking about the whole thing.

Hey, how did Mardi Gras World fare during Gustav?

Not bad. We did fine. After Katrina, we had six feet of water in the Rex den, but we didn’t have any problems this time.

[Laughing] Dogs or cats? I have six dogs and four cats!

Kevin Allman is a New Orleans writer. His Web site is www.kevinallman.com.

128
previous Phoenix Rising
next Shock It to ’Em!