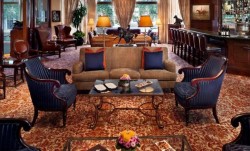 Polo Club Lounge: Old World Elegance with American Swagger
The Polo Club Lounge at Windsor Court Hotel has all the trimmings of English aristocracy, thanks to its decor of dark woods, deep-red carpets, drapes and decadent leather furnishings. It also has one of the largest Cognac collections in New Orleans. One of the classic cocktails served is the WhistlePig Sazerac, concocted with WhistlePig Rye Whiskey, simple syrup and Peychaud’s Bitters.

Head bartender Roger Blais, who guests know well, is celebrating 20 years with the Polo Club Lounge this year. In 2009, Blais was designated as one of the world’s top bartenders.

The Polo Club Lounge also hosts jazz singer, Robin Barnes, who, along with her band, provides the perfect ambiance for meeting and loosening up before a night on the town.

Cocktail Bar at Windsor Court Hotel: Rediscovering Classic Spirits
A little less formal is the Cocktail Bar at the Windsor Court, whose specialty is obscure classics and historic cocktails “that may have been forgotten, but are timeless in their elegance.” Two examples include the La Louisane, made with rye whiskey, sweet vermouth, Bénédictine, Herbsaint and Peychaud’s Bitters; and the Queen’s Cousin with vodka, Grand Marnier, Cointreau, lime juice, Angostura Bitters and Champagne.

Modern Mixology — Root: Unique Cocktails from Quirky Masterminds
“Precision” is the operative word, says Scott Newland, bar manager at Root, when it comes to creating the alluring cocktails for which the bar is known. Like the food menu, Root’s bar follows the same philosophy of palate-pleasing adventure and modernity, serving drinks like the Breakfast of Champions, concocted with bacon-infused bourbon, maple syrup and bitters, and topped off with orange zest.

Everything about Root — from the decor, the cuisine and the beverages — demonstrates an obsession with creating entirely original ways to gratify the palate. With dishes like Cohiba-smoked scallops served in a cigar box and the gin-based Compton Classic cocktail, mixed with rosemary, lime and grapefruit juice, everything about Root is deliciously unique. Newland stresses the detail that goes into every drink, ensuring that ingredients are fresh and that each component of the drink is precisely measured for maximum enjoyment.

Since it opened in 2011, Root, which is located in the Warehouse District, has been continuously lauded as one of the best and most exciting eateries in New Orleans. Late nighters looking for quality food and drink also benefit from Root’s rare hours on both Friday and Saturday — it stays open until 2 a.m. But, hey, what did you expect for a restaurant and bar of such quality? 200 Julia St., (504) 252-9480, rootnola.com