She’s Got Good Jeans: Blue jeans are a wardrobe staple — and for very stylish reasons! 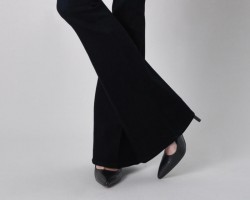 Enter into any closet in any house in America, and there is one item that will always be present. Not the little black dress; not a pair of khakis. This particular staple can be found in the wardrobes of those from every generation, demographic, ethnicity and sexual preference; the most ubiquitous piece of clothing we own is a pair of jeans.

What we know as jeans, in current fashion, were invented by Jacob Davis in 1871 and patented by Davis and Levi Strauss on May 20, 1873. Beginning in the 1950s, jeans, initially designed for cowboys and miners, became standard garb amongst teenagers — and especially for members of the greaser subculture. At first, jeans were simply sturdy trousers worn by factory workers. During this time, men’s jeans had the zipper down the front, whereas women’s jeans had the zipper down the left side. During World War II, “waist overalls” were introduced to the world by U.S. soldiers, who sometimes wore them off-duty. Historic photographs indicate that in the decades before they became a staple of fashion, jeans generally fit loosely, much like a pair of bib overalls without the bib. Up until the 1960s, Levi Strauss called its product waist overalls rather than jeans.

After James Dean popularized the look in the movie Rebel Without a Cause, wearing jeans became a symbol of youth rebellion during the 1950s. Because of this, denim jeans were sometimes banned in theaters, restaurants and schools. It was during the 1960s that wearing jeans became more acceptable, and, by the 1970s, it had become general fashion in the United States for casual wear.

Different styles of denim go in and out of fashion each season. Various shades of blue, and different silhouettes and fabric construction may vary, yet, no matter the mode of dress, it is certain that men and women of all ages will consistently be purchasing denim in every economic market.

Almost all of our beloved hot spots around town carry some manner of blue jeans. Our
fantastic boutiques take pride in staying ahead of the trends, offering shoppers an assortment of current styles. Here are a couple of choice picks for your fall denim fix.

Owner Erin Ewing recommends wide-leg jeans to enhance your denim collection. “The wider legs are trending again this fall and will stick around for longer than people think,” Ewing says. “And, they magically lengthen the legs!” This fall, there is great diversity in the inseams and rises; this allows for more choices to meet the needs of all different body types. Vita’s new favorite must-have denim brand is Fidelity Denim. 1537 Metairie Road, Metairie, (504) 831-1111, vita-nola.com

Owner Melissa Coleman agrees that the silhouette for fall is changing. “I think the message for denim for fall 2015 is really about an adjustment of the eye,” she says. “For so many years, we worshipped the skinny jean. While skinny jeans aren’t going anywhere — as I view them as a classic — flares have really taken center stage.” The flare silhouette can create a longer, leaner and fresher look, especially when paired with a tailored button-down shirt and blazer. The staff at Clover also recommends not packing away your white denim. Outfit them with a pair of booties and an oatmeal-hued sweater for a clean and chic ensemble. 2240 Magazine St., (504) 272-0792, boutiqueclover.com

Most women, and even men, can point out in their closet the pairs of denim that are reserved for days where “I’m feeling thin” and the pairs that are reserved for “I’m feeling a little puffy.” The average person owns seven pairs of jeans, and one in four women own more than 10 pairs, according to PR Newswire’s Shopping Poll. So if your collection is looking a little less than average, get shopping!