This year, Dr. Paul Monsour is celebrating his 25th anniversary of practicing Radiation Oncology at East Jefferson General Hospital. In that time, he has treated more than 8,000 patients and touched thousands more lives. 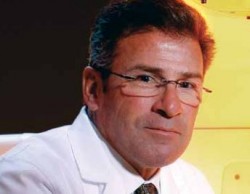 “At least once a month, I’ll see a patient who had very advanced cancer and for whom curability wasn’t expected,” Dr. Monsour says. “And then there they are, talking to me about their families or vacations they’ve taken. That’s why I come to work each day!”

Dr. Monsour was initially drawn to medicine because he was fascinated by the science of the human body, but it was not until his junior year of medical school that he began to consider oncology. A native New Orleanian, Dr. Monsour received his undergraduate degree in Biology from the University of New Orleans before graduating from LSU School of Medicine in 1987. While completing his residency in Radiation Oncology at LDS Hospital in Salt Lake City, Dr. Monsour was awarded the Young Oncologist Essay Award by the American Radium Society for his work in melanoma.

In 1991, Dr. Monsour returned home and joined the Radiation Oncology Department at East Jefferson General Hospital, where he is joined by two other physicians and a team of physicists, therapists, dosimetrists and nurses. Dr. Monsour says he is thankful to “work with such smart and wonderful people each day.”

His office is skilled at treating all types of cancer — including cancer affecting the head and neck, breast, lung and prostate — and employs a variety of advanced treatment methods, such as brachytherapy, external beam treatments and radiosurgery.

“Our patients are very fortunate to have so many treatment options available to them,” Dr. Monsour explains, “and we have been so fortunate that EJGH continues to take its role as a regional leader in cancer treatment and technology so seriously. The hospital has always been supportive and made sure that we have the most up-to-date equipment. If you’re going to treat cancer, we know you have to be serious about it and that requires serious treatment options.”

Dr. Monsour says that having all of these varying treatment options available is one of the most exciting challenges of his day. “Each morning, I go over my schedule for who I’ll be seeing,” he says. “I’ll review each patient’s lab reports, medical history and data; it’s when I develop my game plan! It’s a challenge that I enjoy, and, at the end of the day, seeing positive treatment results is extremely rewarding.”

Though he says that about 90 percent of radiation therapy treatments are done using linear accelerators, Dr. Monsour has developed a unique level of expertise in brachytherapy, particularly prostate brachytherapy, and is one of the most experienced physicians in the area using this technique, which involves inserting radioactive implants directly into the tissue.

Dr. Monsour began studying brachytherapy as a treatment for prostate cancer in the late 1990s, and his pursuit took him to intensive courses at MD Anderson Cancer Center and The University of Virginia. He has completed hundreds of brachytherapy treatments, and he recently compiled a study that tracked all of the prostate cancer cases his office has treated using brachytherapy since 2001. He presented the study at the American Society of Clinical Oncology’s Genitourinary Cancers Symposium in March.

The data showed cure rates exceeding 95 percent, which he says is “wonderful news for patients” as it demonstrates that the “experience of our doctors in treating prostate cancer is unparalleled. Our patients can be comfortable knowing that we will help them make the right decisions in the treatment of their prostate cancer.”