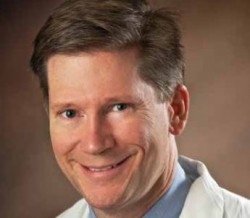 Dr. Peeper, who grew up in Arkansas and Tennessee, came from a fairly large family. He says his family was very close to the community’s doctor, who was the same man who delivered Dr. Peeper, and that relationship was influential in his choice to pursue medicine. After his three years at Oxford, he attended medical school at Columbia College and attended NYP/Weill Cornell Medical Center for his residency in Obstetrics and Gynecology.

Though his studies took him all over the world, Dr. Peeper visited New Orleans as a child. He enjoyed the city and its unique culture, so, when it came time for him to choose where he would practice, Dr. Peeper chose to return to the South and came to New Orleans in 1994. He joined Crescent City Physicians in 2002, and he sees patients at the group’s Uptown and West Bank locations.

Dr. Peeper was drawn to the breadth of issues within the OB/GYN practice, which combines practical medicine and surgery, and he has always enjoyed being able to follow his patients throughout their lives. To treat gynecologic issues, Dr. Peeper uses robotic surgery, a method rooted in precision and timing, which appeals to his training as a classical pianist. Dr. Peeper, who made his musical debut at Carnegie Hall and has played locally with the Louisiana Philharmonic Orchestra, says working with the da Vinci Surgical System is like being at a piano. “Dexterity in one helps with proficiency in the other,” he says. He feels his experience playing with various chamber groups equipped him to work as part of a team, whether he is performing surgery or delivering a baby. “We’re all just there to help the woman in the lead role get through it,” he says, laughing.

Studying and practicing all over the world, including Europe, India and Asia, has given Dr. Peeper a truly global perspective. But whether he is delivering a baby in India or in New Orleans, Dr. Peeper says the “goal is always a healthy birth experience.” He is a strong proponent of proper hydration during pregnancy and he stresses the importance of fetal activity counting. “If you’re not feeling normal activity, that’s a sign that you need to come in and get tested,” cautions Dr. Peeper, who says that when expectant mothers reach a certain point in their pregnancy, they should feel at least 10 movements within one hour every day — although many will feel more.

Although he has delivered thousands of babies, Dr. Peeper says that each one is different. He makes it a point to be at each one of his patient’s deliveries.

“I’m basically always on call,” says Dr. Peeper, “but I think it’s important to be there for my patients. It’s just such a private and personal moment, so I want to be there.”