A Passion for Fashion 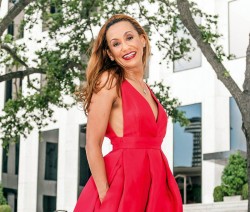 Before she became one of the city’s most stylish faces, an editorial and commercial stylist, costume designer and the founder of New Orleans Fashion Week, Tracee Dundas was a self-proclaimed “tomboy.” She grew up with three older brothers outside of Lafayette in St. Martinville, Louisiana.

“I was very athletic growing up,” Dundas explains, “but at one point, I just sort of pulled away from sports and got into modeling. That’s what attracted me to fashion originally.”

Though she has experience in front of the camera, Dundas says that she has always been drawn to the creative side of fashion, including designing and sketching, but, when she realized her gift and passion for styling, she was truly able to shape her career. She graduated from the University of Louisiana at Lafayette with a dual degree in Apparel Design and Fashion Merchandising. Her knowledge of fashion and modeling experience drove Dundas to open her own modeling agency, AboutFaces, and she became the go-to gal for producing mall fashion shows throughout Louisiana.

When Hurricane Katrina struck in 2005, it displaced her talent and nearly wiped out the local entertainment industry. Like so many people following the storm, Dundas says the shock of the life-changing experience of the storm made her take a step back and realize that she wanted to reinvent herself.

She shifted her focus to film production, working as a costumer on film and commercial sets, and found herself splitting her time between New Orleans and New York. She found herself drawn to New York’s Fashion Week, and, after some research, found that other smaller markets like Charleston were hosting their own regional fashion weeks, which caused her to think, “Why not New Orleans?”

Dundas started attending different Fashion Weeks, and she set out to find quality local designers from Louisiana and along the Gulf Coast. She sought advice from local stylists and industry leaders to see whether they felt a Fashion Week could be successful in New Orleans, and, when she gained support from major retailers like Saks Fifth Avenue, she was motivated to pursue her idea. After about 18 months of hard work, research and making contacts, New Orleans Fashion Week made its debut in March 2011. It was a success for Dundas, the city and the designers.

“The goal of the event has always been to give local designers a platform to showcase their collection,” says Dundas, who serves as New Orleans Fashion Week’s creative director. “For three days, they are able to promote their business to local media, retailers and the general public. It’s opened many individual’s eyes that they can build a career in fashion in New Orleans.”

Dundas says the most rewarding aspect of the event is its ability to create connections among its participants. “The successes have been incredible!,” she says. “After Fashion Week, I’ll hear that designers have connected with local retailers. I’ve had models get signed with agents, and walk in shows in New York and Paris. I’ll hear about photographers who come shoot Fashion Week and then book big clients of their own, or designers who have been invited to showcase in New York and L.A.!”

After the success of Fashion Week, which will host its sixth annual show in March, Dundas says she is “thrilled that people and businesses are coming to me for all things fashion-related.” She serves as the fashion instructor for the Ogden Museum’s Advance Fashion Camp, has acted as the host and emcee for special and red carpet fashion events, and even spearheaded the rechartering of the New Orleans Chapter of Fashion Group International. Dundas is also the stylist for several magazines, and she hosts the “Fashion Friday” segment on FOX8 News. Throughout her career, she has worked with a number of national clients including Lucky and Essence magazines, Nike and Payless.

Even when she’s not on the clock, Dundas is still working to promote local fashion. “I like to support our local designers,” she says. “Whenever I wear something by someone local, it always seems to get noticed. It’s a great feeling to say that it’s by a New Orleans designer! I feel like I’ve helped raise the local fashion bar!” fashionablyyoursnola.com