Brandin Cooks returns to the field with speed and confidence. 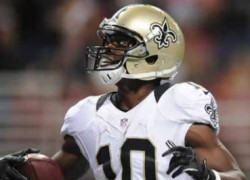 The New Orleans Saints’ offense needs a healthy Brandin Cooks to return to the playoffs. Injured in the midst of a breakout 2014 season, in which he was destined to have a 100-touch Rookie of the Year caliber campaign, Cooks reported to 2015 camp in good shape. Last year’s injury — a freak fracture to his thumb — occurred in a seemingly innocuous high-reaching grab over the middle, in which Cooks showed his typical athleticism, so it was quite a surprise and a blow when he exited the game and also the season.

Entering this season, the once wide-eyed rookie is now the receiver who is most expected to lead the team in receptions — and be a difference-maker both on and off the field. Along with expectations, though, comes the burden of performance and leadership. But also with an added season comes poise. As Cooks himself said at the Saints training facility during minicamp, “I’m a lot more confident now that I know where I’m at and where I want to be, and how I fit in with this offense. Now I can focus on that. I’m expanding on being that playmaker that I am, to be more explosive. Being able to do that consists of me not thinking too much and helps [me] play faster. That’s my biggest goal — not thinking so much; being smooth; and playing the game I’ve always been playing.”

Drew Brees reiterated this as well, stating that, in terms of whether Cooks was on the same level as last year, he is “Beyond, further along. Obviously, that was a tough break losing him with six or seven games to go, but his focus from the minute he got healthy was phenomenal. We trained together in San Diego before coming back out here, and that guy was ready to go in February. You had to tell him, ‘Hey, slow down young buck — we still have some time,’ but he has been chomping at the bit. Just watching him out here, I see so much progress just from a confidence standpoint. His knowledge of the offense now — having been in it for a year — and just how explosive he is. He is hard to cover.”

The Saints find themselves in one of the more unusual situations in the NFL as they have lost multiple leading receivers in the last two seasons, starting with Darren Sproles after 2013. In addition, the team’s leading two receivers from last year, Jimmy Graham and Kenny Stills, have departed, as have two more reliable outlets, Pierre Thomas and Travaris Cadet. It remains an open question whether the other young wide receivers — Nick Toon (a past fourth-round sleeper), and Brandon Coleman and Seantavius Jones (both ubertalented but raw, free agent finds) — can ascend to become NFL quality starters. It is essential that Cooks and Marques Colston, who remains a solid cornerstone in the passing game, provide a solid base from which Drew Brees will be able to operate, while also permitting Toon, Coleman and Jones to grow.

The results from the Saints’ summer camp have been promising, as Cooks glowed when given the chance, showing the same leaping ability and quick moves that made him such a star coming out of Oregon State University last year. And then there is his pure, full-throttle speed. In perhaps the most scintillating play of the summer, during a two-minute drill, Cooks flew past cornerback Terrence Frederick to grab a wide open 62-yard touchdown pass from backup quarterback Luke McCown, giving a hint of what might be in store this season. It is just that ability to fly past defensive backs that might foreshadow a slightly different role for Cooks than what he played last year.

The players who have left have taken with them the numbers and targets they pulled in last year, but they also have left offensive roles that must be filled. One of those roles is that of the deep speed merchant occupied in 2013-14 by Stills and, before him, Devery Henderson. Last year, Cooks played all over the field, including frequently behind the line of scrimmage, which partially helped explain his fairly low 10.4 yards per reception.

In four prior seasons with Brees, Stills and Henderson tallied nearly twice that average or better; however, last year, Stills’ average dipped from 20 to 14.8 yards per catch.

That big-play ability is one area in which — despite the 2014 Saints continuing their overall impressive offensive numbers from prior seasons — the team would probably most like to see improvement. As Brees has stated, “A big play is considered a 10-yard run or a 20-yard pass, so I’d say we were way deficient on the 10-yard runs, and we were deficient compared to usual on the 20-plus passes. So, yes, those big-play opportunities I think we didn’t take advantage of enough. I felt like those one-possession games we just weren’t winning.” The addition of Max Unger at center might allow Brees more time to find Cooks deep as well.

In the coming season, the Saints will be looking to make significant changes by incorporating new ideas developed in the off-season — and that will not only be reflected by the new personnel on the field, but also in how they do things. But nowhere will the effort to do things differently be more noticeable than at the wide-receiver position, as the Saints will find ways to best utilize their young playmakers, starting with Cooks, who will likely emerge as the Saints’ No. 1 passing target and possibly as an All-Pro candidate as well.