Hot Child in the City

No amount of heat can melt a mother’s love. 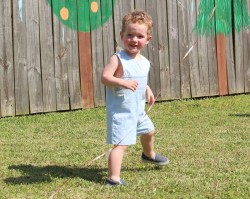 The moment I have been dreading all morning is about to happen. I can feel it. I spent the past two hours sipping coffee and watching my 2 year-old son play contently with puzzles, trains and drums. But his contentment won’t last. It never does. In a little while, he will feel the calling — the need to do the last thing I want to do today.

The world around me silences. I feel an overwhelming pang of sorrow. Why? Because I have to go outside. In New Orleans. In what feels like 120 F heat. In my third trimester of pregnancy. I want to revert to my toddler self and pound my fists into the ground screaming, “I don’t wanna!”

I am tempted to distract him with indoor activities that will allow me to be spoiled by the central air conditioning. “Are you sure you want to go to the boring park instead of watching Cars?” “Outside is so yucky. Wouldn’t you rather eat yummy cookies in the play room?” I don’t throw out those cheap attempts at avoiding the heat though, because the day will come when my son would rather sit inside playing video games than be active; I want to delay that day as long as possible. So I dress my son. Then I dress myself — each move I make is filled with the dread of one who is returning to a job at a manure factory after a monthlong holiday in the south of France.

When it’s time to leave my 68 F oasis, I open the front door and am slapped in the face by the heat. I load my son into the car, breathing through my mouth (because that somehow makes inhaling this fire air more bearable). As I scorch my hands on the hot steering wheel, I curse myself for not choosing a house with an air-conditioned garage or at least for not having started the car 15 minutes before we left. I drive to my local coffee shop and order an iced tea, foolishly thinking it will keep me cool at the park.

The ice in my tea melts minutes after arriving at Audubon Park. After 30 minutes, it’s as hot as if it had just been poured from a teapot. I am a wilted version of my former self. The hair I spent an hour blow drying is piled on top of my head in a frizzy mess. My makeup has melted away. I have deconstructed my outfit to make me feel cooler, thus making me look way less cool. It’s too hot for clothes. Again I curse myself, “Woman, why didn’t you lose 30 pounds before the summer so you could walk around naked?” I stare longingly at the women wearing tank tops and tiny shorts, and I think about how much cooler they are than me in my over-the-belly pregnancy capris that are now rolled above my knee and my maternity tunic with short sleeves that are tucked into my bra straps.

Then I look at my son. His cheeks are as flushed as cherries. The hair he inherited from his mama, brushed and wavy when we left the house, is damp and twisted into tight curls. His crisp, smocked romper is already covered in dirt. He smiles at me with a look of pure exhilaration as he runs down the walking path, beneath the mossy trees, toward the playground. When we arrive at the playground, a streetcar passes by and he excitedly shouts, “Look, Mama! A train!” After playing for a while, we stop to get snowballs before heading home. He falls asleep in the car with blue streaks on his face and a happy heart. I smile.

New Orleans — you dirty, sweaty beast. You are so hot that you make me miserable, but you are so special that the misery is always replaced with joy.