In this Thomas Sully masterpiece, Deborah Vinson saw what most could not: a diamond in the rough 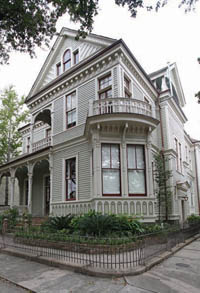 Deborah Vinson is not afraid of big projects. Certainly, the Thomas Sully house she took on in 2001 was no small matter. To start, the roof leaked so badly that children’s plastic swimming pools were all around the rooms to catch rain and other debris.

But where others would have flinched, Vinson decided to dig in and save the historic property. Call her a preservationist, with a proclivity toward fashionable recycling. Fashion has always been a part of her life. At 14 she applied for a special permit to work at the now shuttered Kreeger’s Store, once a bastion of Uptown style. At an even earlier age, her little sewing machine hummed as she made things for herself and her dolls and dollhouses. Today, she oversees workrooms that turn out valences, curtains, upholstery and more. And that is a sideline business. Monday to Friday, she is an executive at the world’s largest trading company, jumping on planes the way many jump on the streetcar to get to work.

“The house has had several incarnations. It was built in 1880 as a family home; over the years it morphed into a multiple-family dwelling and a neglected, chopped-up apartment house. The last owner was trying to turn it into to a B and B, when she finally ran out of energy and income. I walked in and saw the potential,” explained Vinson, on a rare weekend when no parties were planned and there was simply a family in residence.

Where most saw a wretched wreck, Vinson saw 12- and 14-foot ceilings, Arts and Crafts–style inlaid wood floors, original mantels, surrounds and fireplaces, and a glorious leaded-glass front door. “One thinks of Sully’s architecture as the ‘wedding cake house’ on St. Charles at Rosa Place or the classical Federal house on St. Charles and State Street. This house is strong, sturdy, almost masculine. Its style is Queen Anne Italianate, and though I knew it would take masses of work, money and patience, I felt it had to be saved.”

Over seven years, walls have come down, years of neglect have been scrubbed, polished from floors, doorsills and transoms. Parts of the stairway have been replaced and a former porch was enclosed, all while maintaining the integrity of the house. The kitchen, however, was gutted to make room for thoroughly modern appliances worthy of the constant entertaining that takes place. Rooms on both floors have been converted into handsome offices, as well as elaborate master and guest suites, a media room and practical digs for teenage boys. 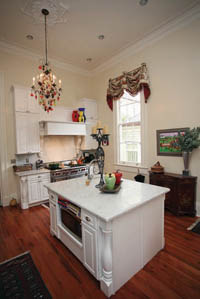 Vinson’s travels have led to an eclectic assemblage of treasure. A Chinese terra cotta soldier stands guard in a living room straight out of Proust. The formal dining room boasts a chandelier and scones from the Paris Opera House. Things of great value and sentimental trinkets have equal importance among miles of silk, cotton, linen, passementerie and furnishings old and new.

“The work on the house never stops,” says Vinson, of whom one could also say never stops collecting, experimenting and entertaining. The house, once a wreck, is now a home filled with joie de vivre, love and laughter … saved, restored and nurtured back to its original purpose: A grand family home with no pretensions.

761
previous 10 Things to Do in April
next Dream House