When native New Orleanian Genevieve Douglass had her daughter in November 2013, she found herself facing the same issue that so many new mothers face — finding time for working out. 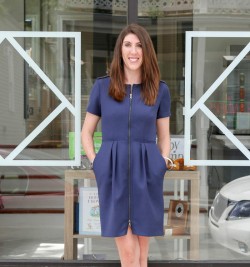 “It’s so hard to find that balance, especially as a working mother,” says Douglass, owner of KINDRED Studios and Uptown PR. “My time with her was limited, so when I wasn’t working, I would rather spend time with my child than take a fitness class. I wanted an outlet that would allow me to spend time with my daughter, while also making time for myself, because I knew it was important for me to stay active — and ultimately, set a good example for my daughter as well.”

For a stint, Douglass moved to Birmingham, Alabama, where she honed her skills as a public relations and event/product marketing specialist (working with architecture firms, interior designers, and clients in the retail and fashion industries) before moving back home to open her own agency. She opened Uptown PR in July 2011, with the goal of filling a void for lifestyle public relations that was not being serviced by local agencies at the time. The boutique firm focuses on event and product promotion, branding, event management and social media.

So when she found herself trying to balance being a mother and a professional business owner, while also maintaining a sense of self, Douglass applied her PR expertise and decided to once again create her own niche by filling a void in the marketplace for the underserved parent population.

“I thought to myself, ‘Why isn’t there a wonderful, modern, upscale place that caters to busy, active parents?’” Douglass recalls.

Douglass, who has been a dedicated yogi for more than eight years, and continued her practice through her pregnancy, says she is “not a gym person,” but that she has always thought about opening her own barre or fitness studio. Her vision was to create a clean, chic space, full of parenting amenities and modern conveniences.

The studio also hosts several workshops, such as nutrition, breastfeeding and postpartum support sessions, and social gatherings for local parents. There is also a Romp Room where toddlers can play, and where KINDRED offers free playtime on Tuesdays and free story time on Fridays. The studio also has collaborated with local businesses to offer juices from Sprout and Press (formerly The Pressery) and clothing and baby products from ZukaBaby.

“KINDRED Studios is a place where you not only can get fit, but also play, meet other parents, shop and be well,” Douglass says. “We’re trying to offer a lot of interactive, social events that bring parents together to build that modern parenting community.” The studio also offers free Wifi so parents can “multi-task and work on the go, while being active and spending time with their child.”

Though currently KINDRED is the only one of its kind, Douglass is interested in franchising the business nationally, saying that the modern, upscale and gender-neutral format could work in just about any market. “The studio appeals to the idea of today’s modern parent,” Douglass says. “As my generation and Millennials are becoming parents, I feel that the trend is more hands-on parenting than ever before. We still want to maintain the active lifestyle that we had prior to becoming parents, but incorporate baby, and hopefully raise health-conscious and active children. That’s what KINDRED is all about!” kindred-studios.com

799
previous Dr. Robert Hancock: Looking Out for Man’s Best Friend
next J. Steven Spires: A Storyteller in Our Midst