J. Steven Spires: A Storyteller in Our Midst

For so many people, last month’s 10-year anniversary of Hurricane Katrina brought back difficult memories and a variety of emotions. 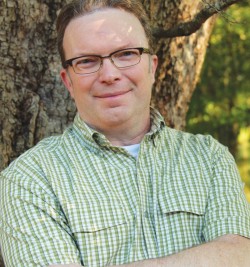 For elementary school teacher and children’s book author J. Steven Spires, the anniversary was the culmination of 10 years of work on his children’s book, The Oak Tree. Inspired by the storm, The Oak Tree is a story of love and hope in the midst of disaster. Although it has weathered many storms, the tree’s concern is not for itself but for the family living next to it as it watches a storm approach.

When he was driving back and forth between his damaged home in Slidell and his evacuation residence in Mississippi, Spires relied on his imagination to keep him awake during the long, late-night drives.

“I just got tired driving back home one day, so to keep my mind awake, I started thinking to myself what would it be like to be a tree watching the storm come in,” says Spires, whose imagination has always been an asset, especially during his early childhood.

The son of two missionaries, Spires spent a chunk of his childhood in what is now known as Bangladesh. From the ages of 3 to 6, Spires recalls growing up with Bengal tigers, baboons and king cobras, and sleeping under mosquito nets. He also recalls being a bit of an attraction himself.

“I looked different than the rest of the kids in the village, so they would follow me around and I would tell them stories,” Spires says. “We didn’t really have any toys, so you had to create your own adventure and your own fun. We told stories and used our imaginations. So I guess I’ve always been a storyteller!”

When he was 6 years old, Spires’ family moved to Slidell, where he has been ever since. His love of stories continued throughout his young adulthood.

“I always loved to read children’s books,” he says. “I started with Dr. Seuss and then started reading Chris Van Allsburg [the author of children’s classics Jumanji and The Polar Express],” who Spires says has been one of his true inspirations. “I was amazed by his talent even as a young adult. I just love his style.”

When he’s not writing, Spires is a husband and a father of five, and he has been teaching the third grade for 27 years. He has been at the same school, Honey Island Elementary School in Slidell, for the past 23 years.

“Unfortunately, my schedule does not give me a lot of time to really devote to writing,” Spires says. “But I love it! I’ve written some poetry; I would love to write songs. I have so many ideas. Eventually, I want to write a short chapter book about a third grader’s adventures, based on my own experiences at that age.”

Just like in his book The Oak Tree, which focuses on glimmers of hope in times of disaster, J. Steven Spires’ Katrina experience, though dark and difficult, is what ultimately triggered his writing career.

“The days following the storm gave me time to write — and inspiration,” Spires says. “I’ve been reading all these books to third graders over the years; I guess I sort of just thought to myself one day, ‘I could write a book like that,’ so I did!”

The Oak Tree celebrated its release party on Aug. 29, with 10 percent of proceeds supporting the St. Bernard Project — a non-profit organization whose goal is to help storm victims and families nationwide. Spires’ goal for the book is for it to become a resource for storm preparation and understanding for children in the wake of any disaster. Currently, Spires is in the midst of a press tour and presentations through December. His books are available on his website and through amazon.com. jstevenspires.com/store

350
previous Genevieve Douglass: Finding Balance with Baby
next Preserving the Past