We live in a world that is obsessed with instant gratification and funded with debt. 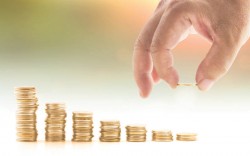 Most things that you want in life, you will have to buy. Many households are barely making ends meet, and many more are using borrowed funds to do even that. The looming question then for many families is: Will this be enough money to provide for my household? This leads many people to borrow money — countless loans that have high interest rates attached to them. Of course, it doesn’t help either when television ads prompt you to buy items that will supposedly make your home, family and life better. But the reality is that only money can do that.

The cost of everything has gone up, but many people’s incomes are staying the same (if not decreasing). The not so fun fact is that over the last four decades, most of the real income growth has occurred for only the top 10 percent of U.S. households. That leaves 90 percent of households wondering: Is what we make enough, and will it stay enough?

It’s my passion and mission to raise the bar on American family income. Coming from a well-off family home, where all ends are met, is beneficial for children. It starts a positive cycle of children who come from increasing-income households who then also create increasing-income households. This, in turn, boosts the economy and creates incomes that can cover the cost of living the life anyone envisions for their family.

Given all the ads you see on network television, you would think that every other U.S. household was pulling in $200,000 per year — given the kinds of products that are pushed. Of course, most of the goods bought in the last decade were financed with massive debt and not actual saved wealth. This fact makes the bigger problem become: Can the income you make, which probably did not increase, match the goods you need, which probably did increase, to have a decent family lifestyle — and of course pay off your debt?

There is a hole that family households are stuck in, and that hole is getting deeper. Families are taking out loans and are sometimes even passing these loans onto their children. The average debt in American households is $15,863. In total, Americans are $11.86 trillion in the hole. Debt rises due to simple loans to make ends meet — to car payments, mortgages and college loans. Everyone is set for the moment but will eventually have to pay that money back.

This brings me to what I call “The Cycle,” which is moving quite slow and at a decreasing pace. It’s the consumer cycle. Higher consumer spending puts the economy on a positive track. Higher spending leads to more jobs and higher incomes, which in turn leads to higher spending. So as the price of goods and services go up, incomes do too. Except, people are spending less of saved wealth and more of borrowed money. Replace the words higher and more with lower and less. Lower spending leads to less jobs and lower incomes, which in turn leads to lower spending. So that means, as consumers, we are at fault for our own debt — and the only possible way to turn it around is to spend our own money. Who says money can’t fix things?

1. Know Your Debt
As unbelievable as it may be, many people do not know exactly who they owe or how much. Make a list of all your debts. Know the creditors, interest rate, balance and minimum monthly payment.

2. Try to Lower Your Interest Rate
Interest is the real killer sometimes. Depending on your credit, you may qualify for much better interest rates on credit cards. Turning to debt consolidation companies will help too.

3. Stick to a Budget
Dollars add up. A lot of people see their money disappear on unnecessary things. A habit that cost $20 dollars per week costs you $1,040 dollars per year. Have a small, set amount that goes toward other things that are not necessary — maybe something you do for fun — but, once that money is spent, no more!

4. Know Your Liabilities Versus Your Assets
Your asset column should always outweigh your liability column.

5. Save Your Money and Diversify
Stop spending your hard-earned money on clothes, shoes, jewelry, etc., and invest your
money instead.

6. Invest in Income-Producing Businesses/Properties
You can invest in businesses and/or properties with little to no money down. Focus
on staying out of debt and building your net-worth.

176
previous Life Lessons
next September 2015: Ten Years After the Deluge