Home IN THIS ISSUE September 2015: Ten Years After the Deluge
IN THIS ISSUE
SPORTS
August 31, 2015 Paul Wegmann 0

September 2015: Ten Years After the Deluge

This is how Sean Payton helped save New Orleans. 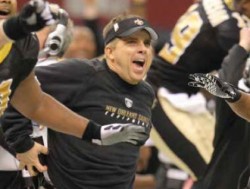 The rain poured down in August 2005. The wind tore away roofs. Ten years ago, in September 2005, as the people emerged, the sun shone, calling to mind what had been normal not long before. Interwoven into the fabric of life in New Orleans had been football — tailgates, food, drinking, laughter and football. But Hurricane Katrina had hit — hard — like a hammer blow. And it scattered everyone and everything. Truth be told, it seemed impossible to imagine that football and the lives of which it was a part would ever return to normal. As New Orleanians scattered about in Houston, Memphis, Atlanta and everywhere else on the map, a million concerns passed through their minds; their futures were in doubt; and the ordinary flow of their lifeblood, the weaving of ritual with existence, had been broken.

Intermittently, news of local sports trickled in and filtered into the collective conscious, forming the background of more important news, like which neighborhoods were flooded and how high. On Sept. 19, the Saints would be playing its first “home” game in New Jersey, in the true home of the New York Giants. In a scene of bizarre absurdity, Giants fans filed into their own stadium to see a foreign team’s logo painted in the center of the field and in the end zones, black and gold banners festooning a stadium ordinarily dressed in red, white and blue. The team reflected the sensation of the citizens: vagabonds, gypsies on the run, with an uncertain and seemingly interminable event horizon.

Gradually the team would temporarily land in San Antonio and would play several “home” games in Tiger Stadium in Baton Rouge. Again, the surreality of watching the Saints play in the home of the Louisiana State University Tigers, black and gold posters and paint over purple and gold, was both a happy respite from the burdens of recovery and also a strange reminder that life was severely disjointed. As winter 2005 arrived in New Orleans, so did returning citizens.

The midweek morning commuter traffic was always easy like a Sunday afternoon; the roofs were no longer missing but covered with blue tarps; the streets were dry but occasionally pocked with uprooted trees and tipping lampposts.

And in the beginning of 2006, as winter waned into spring, the Saints hired Head Coach Sean Payton. Saints fans did not know what to expect out of their new head coach — but they knew he had been offensive coordinator for the Giants during their 2000 Super Bowl season, and he had been assistant head coach under legend Bill Parcells. As spring waxed on, the Saints next made the move of signing Drew Brees, a former Big Ten star and second-round draft pick who had apparently been forsaken by his former team (the San Diego Chargers) — and perhaps even by the rest of the league — following a devastating shoulder injury. Under the guiding hand of general manager, Mickey Loomis, the team entered summer of 2006 with a strong draft combination that included future stars Reggie Bush, Roman Harper, Jahri Evans, Zach Strief and Marques Colston. Later that summer, the state of Louisiana announced that the Superdome would be ready for its reemergence into the lives of New Orleanians and primetime national football with a Monday Night Football game against the rival Atlanta Falcons, on Sept. 25, 2006.

During that game, in the Superdome, everything changed for the city. Thousands of fans nervously waited outside until the gates opened into the renovated sports palace. Upon entering, immediately everything felt right — it felt “on.” And it was. Steve Gleason would become a city hero as he struck lightning after the defense had held the Falcons to a quick three-and-out, blocking the first punt of the game into the end zone for a touchdown. Nothing struck the chord of change more than Sean Payton himself, cutting the air in swashbuckling style as Devery Henderson took a misdirection reverse pitchout in for another score soon thereafter. A night of cathartic revelry and earsplitting rejoicing was on.

Sean Payton had arrived in a town emerging from hell, and he would take it to heaven. Confronting adversity like a matador, he led New Orleans out of a recent past of disappointment and dissipation into an attitude of confidence and victory. That attitude would lead the team to a division crown — the franchise’s second playoff victory ever — and its first conference championship game ever that same year. Three years after that, it would lead to a Super Bowl victory, a previously unfathomable NFL Championship, and what might be truly deemed the greatest Mardi Gras parade and Carnival ever. There would be four more playoff seasons to follow; the city went from being the exuberant youngster at the dance to being the experienced old hand at yet another rodeo. New Orleans has since grown in population size to nearly where it was before Katrina, but it has surpassed where it began in spirit. Entrepreneurial energy has been driving reconstructed buildings and rehabilitated neighborhoods; new businesses, restaurants and ideas have sprung up; and the ramshackle banquets and roofs have become a mere memory.

From tragedy and the shock of wind and wave emerged a city and its people, and with them a coach and his team that taught them how to win and gave them a chance to celebrate again. For that, the “City That Care Forgot” will always care about Sean Payton.