The New Orleans Film Festival expands its offerings and its audience 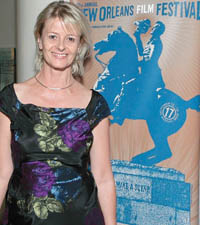 The New Orleans Film Society has been around for 19 years, but lately it has increased in size and profile. In 2006 its film festival included The Queen and Babel, both big Oscar winners. Highlights in 2007 included the acclaimed films Before the Devil Knows You’re Dead and The Diving Bell and the Butterfly, plus compelling documentaries about Louisiana.

This year promises the same interesting mix. Opening night, October 10, is the red-carpet premiere of The Secret Life of Bees, the film adaptation of Sue Monk Kidd’s acclaimed best seller, with a cast including Queen Latifah and Dakota Fanning. On October 16, the festival closes with the blues musical Back Streets, which features B.B. King songs performed by Dr. John and Aaron Neville, among others. Half the profits of Back Streets will help musicians impacted by Hurricanes Katrina and Gustav.

One reason for the festival’s growing renown is Ali Duffey. Duffey, who hails from New Zealand, has 25 years’ experience in film and television in New Zealand, Australia, the UK and the U.S. She moved to New Orleans in 2001 after getting her green card. “I wanted to be somewhere warm and interesting, with nice food and music. It was a no-brainer,” she says. She was appointed to the film festival’s board in 2003 and in 2006 became its executive director. Recently, we spoke about the New Orleans Film Society and this month’s film festival, which takes place October 10 to 16.

NOL: The organization has expanded its purpose since you became executive director.

Ali Duffey: Last year, we changed our name to New Orleans Film Society to reflect the fact that we do more than just the film festival. We do other festivals during the year and other programs. We have an extensive membership and do a lot of things for them as well. The festival itself has many new elements. We have twice as many films as we used to play.

What made you expand the festival?

If you’re going to do a festival and you’ve got all these time slots, why not put films in them? Also, our festival was of an age and our city is of a size that they deserve this kind of film festival.

It’s like having so many children. The filmmakers are so excited. They want to know what’s going to happen, where they’re staying, where their film is playing, where they’re going to sit. I know what it’s like to be in that position. It’s a labor of love, and it’s blood sweat and tears. It has to be honored and respected.

There are many film festivals in the United States. Where do you fit into the spectrum?

That’s a question we’ve looked at a lot. Some people say, why wouldn’t you want to be a festival that distributors come to? Other people say there are enough of those. What distributors want to come to is not a festival that labels itself a distribution festival, but one that is beautifully and thoughtfully curated, because that is where they will find the little gems. We also could be a genre festival, a shorts festival, any number of things. I think because we are the largest festival in the region, it behooves us to remain an intellectual-across-the-board film festival, one that is very well curated, very well selected.

Also, it’s important to us to provide a venue for Louisiana films. Most festivals feel that way—the home team is the one to help. This year we have an I Love Louisiana Day. In addition, we’re doing panels and receptions on issues affecting Louisiana films and filmmaking. Tax credits have been really successful in bringing in films and creating what’s now called Hollywood South. While that provides work for crews in Louisiana, it doesn’t necessarily further the indigenous film industry—the producers, directors and writers here. What are we doing to support and encourage those people? In New Zealand, film companies that work there to pay a percentage of their budgets to the country. That money is used as seed money for local filmmakers. That’s a really smart thing to do, because it makes an investment into the future of their filmmakers. In addition, the Louisiana tax credits start for films with $300,000 budgets. Perhaps we should offer credits to people making smaller films, whose next budget might be $5 million.

In addition to the judged awards, for the first-time festivalgoers can vote for their favorite films.

I’m very excited about that. Every time I’ve been to a festival where people get to vote, they love it. And what can be better for a filmmaker to win an award because the audience loved the film?

What educational services do you provide throughout the year?

Our mission is about film more than filmmaking, so our education projects are about using film to understand ourselves and the world around us. I believe in film. I certainly believe in q-and-a and discussion, but I’m not so much into people telling you what you’re going to see and what to think about it. A good film can tell that story itself. It educates you by the very nature of its being.

149
previous A Royal Affair
next One for the Books