Looking into a crystal (foot)ball to see the Saints’ future 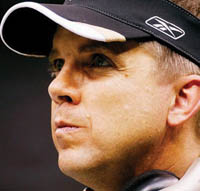 The news came across the wire recently that the Saints had signed Sean Payton to a contract extension that will keep him on as head coach through the 2012 season. The team has largely been on an exciting upswing with Payton, who took the moribund prospects and stagnant roster of the Haslett years and launched the team into a division crown and a very near run at the Super Bowl, unheard of for the Saints franchise. However, since that time, the team has gone 8-11, as of the third game of 2008. So the question arises: Just what are the team’s expectations for the coming four seasons? Surely the Super Bowl and perennial conference primacy, but the team is not there yet. Given that Payton will be the face of the Saints for some time in the future, it may be useful to consider where he has brought the franchise and where he will take it.

The offense has been the hallmark of Payton’s term. Led by Drew Brees, it has regularly meted out punishing performances on opposing defenses, scoring high and piling up yards. The key player developed by the team has been Marques Colston, one of the league’s all-time late-round finds, but in the interim, in which Colston has been out due to injury, including a likely four- to six-week period this year, the lack of steady backup receivers has slowed the offensive production. Whether it be David Patten, Devery Henderson or Lance Moore, the sum of so many parts does not seem to equal the singular ability of Colston. The only receiver who has shown flashes of brilliance and game-breaking ability, Robert Meachem, seems to be the one who also has the most trouble seeing the field. No specific explanation has been stated by the coaching staff as to why Meachem has been so often inactive and when active so rarely used.

The running game has been equally puzzling. In his splendid 2006 rookie season, Reggie Bush torched defenses by receiving the ball, setting records for catches by a rookie running back and for the longest play in NFL postseason history. However, as a runner, Bush has become known as a side-to-side jittering distraction. In just over two years, he has averaged only 3.6 yards per carry, and in his first 30 pro games he has never had a carry of more than 26 yards. His ability as a game-changing receiver has been well on display in 2008, yet Payton continues to insist on using him as the leading ball carrier as well. Taking away his long breakaway of 26 yards in the first game, Bush had 23 carries for 53 yards, a game-stopping 2.3-yard average in the first two weeks. His rushing yards total in the first two games ranked 35th league-wide. By contrast, Pierre Thomas has averaged 4.6 yards per carry in his career with the Saints, including 3.8 this year, but has been allowed a little less than half of the team’s carries. Fans must wonder if and when Payton will ask the same question they have been asking for some time now: Why isn’t Bush carrying the ball less and catching the ball more?

Finally, there is the question of the defense. Rebuilt and retooled from the crumbling infrastructure left by Haslett, it has made great strides. Payton has built a workmanlike linebacking corps, which now features one of the league’s leading tacklers, Jonathan Vilma. He also has one of the league’s great lines—on paper—including Will Smith, Charles Grant, Sedrick Ellis and Kendrick Clancy. The backfield has been similarly revamped, with Roman Harper, Kevin Kaesviharn, Josh Bullocks, Randall Gay, Aaron Glenn, Tracy Porter and Usama Young, all representing substantial investments in the draft or free agency. And yet, while the players change and some games show promising improvement, albeit fleetingly, the defense continues to be the team’s greatest deficiency. In games in which the offense understandably may not be able to repeat its high-octane performances infinitely, the defense is left to its basic task of holding the opponent out of the end zone. In too many games, that has been the failing difference keeping the Saints from being an elite playoff team, which in reality can be a matter of just three or so crucial games. At some point, the question as to why that continually happens, when personnel changes are assiduously made year after year and game after game, becomes not one for the head coach but for the defensive coordinator, Gary Gibbs, because after all, the issue may not be one of talent but rather of scheme.

Regardless of personnel, what Payton has given the city and the franchise cannot be fairly measured. He has brought an example of organization, intelligence and spirit to a once nearly devastated franchise and city, and he will likely continue to do so throughout his tenure. After having seen what is possible in 2006, so many fans want so much more. But perhaps what they want more than anything in their football team is just what they want in their city: progress.