“What’s the point of living if you can’t have fun?” That’s a question that will probably ring true with many New Orleanians, but for Dr. Gary Menszer, vice chairman of the cardiology division at East Jefferson General Hospital, it’s not only the title of a song he wrote, it’s also a sort of mantra. 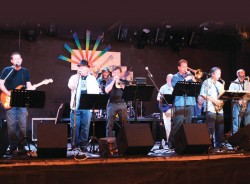 Dr. Menszer is a member of an 11-member band, the N.O. Arrhythmia, composed mainly of fellow physicians, techs and nurse staff at EJGH.

An arrhythmia is a disorder of the heart rate, and, considering the band got its start within EJGH’s Cardiac Cath Lab in 2014, it is a fitting name for the group. N.O. Arrhythmia “started out with a drummer, guitar, sax and trumpet,” says Dr. Menszer, who has been the medical director of EJGH’s Cardiac Rehabilitation unit since 1990, and who also is the band’s rhythm guitar player and songwriter. “Then we just started adding people from the hospital or people we knew from other musical endeavors,” he says.

Dr. Menszer has been playing music since age 14; he started writing songs at age 17. “I played in high school bands and college bands, as well as [having] some singer/songwriter gigs playing at coffee houses,” he recalls. Though he has experience behind the mic, Dr. Menszer says he is happy to have the talented Joe Sims and Maggie Gehegan, both nurses at EJGH, on lead vocals, joined by Duane Hunts, who has a master’s degree in Healthcare Administration. “My voice is good enough to write songs and compose, but there are much better singers than me — and we’re fortunate to have several of them in the band,” Dr. Menszer says.

N.O. Arrhythmia made its debut during a hospital event in 2014, and Dr. Menszer says they were “surprised how good people said we sounded,” which was enough to encourage the band to keep going. They started playing jazz standards, but their set list has evolved to include more dance favorites and many different musical styles, including some originals, such as Menszer’s “What’s the Point of Livin’ if You Can’t Have Fun.”

Dr. Menszer says the band is always working on its set list, which includes classics like Van Morrison’s “Brown Eyed Girl,” Chicago’s “Saturday in the Park” and Bruce Springsteen’s “Tenth Avenue Freeze Out,” as well as new favorites like Bruno Mars’ “Uptown Funk.” He also says, “Joe Cocker’s ‘You Can Leave Your Hat On’ was a fan favorite the first time we played it!”

N.O. Arrhythmia has played several benefits at Southport Hall, and the band has a strong interest in expanding to play more weddings and parties. “We want to play at places where people are already having fun and just want to dance,” Dr. Menszer says, “because, like we say, what’s the point of living if you can’t have fun?”

1.25K
previous Preserving the Past
next Betsy and Jude Matthews: Minding Your P’s & Q’s