Ever since Betsy and Jude Matthews opened P’s & Q’s (a.k.a. Pies & Quiches) on Magazine Street in April 2013, life has been, well, pretty sweet! 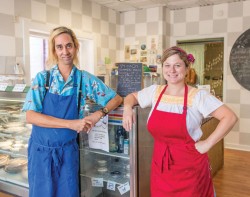 “We both said we’d give it the ol’ college try and see what happens,” recalls Betsy, who is the shop’s resident pastry chef. “Two and a half years later, we’re still pleasantly surprised!”

The couple, both of whom are from New Orleans, opened the shop about six months after they got married. Neither Betsy nor Jude had any formal training or bakery experience, but they decided to start their own business when they were both unsatisfied in their jobs waiting tables and working in film production. Betsy says the rave reviews for her pies from friends and family, and a pie niche that needed to be filled locally, were enough to encourage her and Jude to go for it. “Honestly, I never imagined this was something I wanted to do,” Betsy says. “But I watched several friends open their own businesses and saw how fulfilled they were, and we were inspired.”

Betsy recalls that she always enjoyed baking pies, and one of her earliest memories about pies, aside from liking to eat them, was about an essay she had to write between middle school and high school about something that she loved. “I wrote about pie,” she says.

Though Betsy and Jude have had to teach themselves how to run a business, Betsy learned how to bake pies from her mother. Her pie crust, along with several of P’s & Q’s pie recipes, including the ever-popular chocolate cream, are her mother’s recipes. Chocolate is also Jude’s favorite. “I really don’t bake anything else, as much as I would love to,” Betsy says. “We’ve decided to stick with what we’re good at!”

The decision to stick with pies has proven to be an effective business model for Betsy and Jude. They offers 10 different types of pies daily, including six sweet and four savory flavors. Though the menu changes weekly and they enjoy introducing new flavors, Betsy says they try to “stick with the basics, because that’s what sells,” and because customer satisfaction is always a priority. They make sure that one quiche flavor is always vegetarian (and the pie crust happens to be vegan) so they have been able to bake some vegan pies upon request.

The weekly menu often highlights seasonal, local ingredients. “We really try to use the best ingredients that are fresh and in season,” Betsy says. “It just makes our jobs a lot easier, because they already taste so good.”

During the summer, P’s & Q’s uses Louisiana strawberries and blueberries to create the popular berry pies, which are Betsy’s favorites. The highly sought-after tomato pie is available for a “very small window,” according to Betsy, when tomatoes, including the Creole variety, are at their peak and plentiful. The crawfish pie, available in spring and early summer, is also in-demand, and P’s & Q’s has customers anxiously awaiting these two seasonal favorites year-round. Now, as the weather turns and New Orleanians yearn to feel the fall chill in the air, Betsy says she and Jude are gearing up for a busy season.

“October through December is definitely our most popular time,” says Betsy, who sticks with the classics — like apple and pumpkin sweet pies, and savory pot pies — to meet seasonal demands. As the holidays approach, P’s & Q’s begins taking orders on Nov. 1 until about four days before Thanksgiving, and then does the same thing again in December for Christmas. “Of course, we always keep some pies in the shop to sell on a first-come, first-served basis, but we tell our customers that it’s best to order in advance so you’re guaranteed to get what you want. I hate to see someone not get the pie they want!”