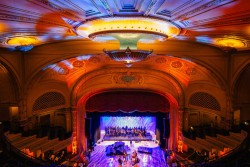 The historic Orpheum Theater, which was built in 1918 and devastated during Hurricane Katrina, has been meticulously restored to provide concert-goers with a wealth of cultural entertainment. Purchased in 2014 by Roland and Mary Von Kurnatowski, owners and founders of Tipitina’s and the Tipitina’s Foundation, along with Capital partner, developer Dr. Eric George of ERG Enterprises, the Orpheum features impeccable acoustics that are said to rival that of Carnegie Hall.

The venue opened its doors Aug. 27 with a private Champagne reception for family and friends, with speeches by the owners and Mayor Mitch Landrieu. Musical performances by the Louisiana Philharmonic Orchestra, Helen Gillet, Betty Winn and One A Chord, and Allen Toussaint entertained the crowd. The event also featured food from Bella Luna Catering and cocktails by T. Cole Newton of Twelve Mile Limit (both companies are the theater’s in-house partners).

Some of the confirmed music, comedy and dance acts include Wilco, Dwight Yoakam, Rickey Smiley and Paul Taylor Modern Dance Company. “The Orpheum Theater really belongs to the city and the people of New Orleans,” Dr. George says. “We are simply the custodians returning it to its proper place.” orpheumnola.com

October Lineup at The Orpheum Theater

Film Fanatics: The New Orleans Film Festival returns to the Crescent City with screenings throughout October.

The New Orleans Film Society has announced the lineup of films to be screened during this year’s New Orleans Film Festival. The 2015 festival lineup features 173 selections from NOFF’s open call for submissions from independent filmmakers, plus one dozen additional films that have acquired distribution. These films were chosen from more than 3,400 total submissions that poured in from 100 countries around the world. This year, 24 feature films have been selected for competition, including eight films in the Narrative Films in Competition category, seven films in the Documentary Films in Competition category and nine films in the Louisiana Features category (by Louisiana filmmakers). A few of the Louisiana features to be on the lookout for include Consequence; Dog Man; and Forgive and Forget. And this year marks the festival’s first as an Oscar-qualifying festival in the documentary shorts category.

The opening night feature, Born to Be Blue, will screen at the newly restored Orpheum Theater on Oct. 14. This biopic on jazz legend Chet Baker stars Ethan Hawke. Meanwhile, the featured Centerpiece film, I Saw the Light, is a music biopic shot in Louisiana about country music legend Hank Williams. It will be presented at the Orpheum on Oct. 17. The eight Spotlight films are The Black Panthers: Vanguard of the Revolution; Carol; Legend; Miss you Already; New Orleans, Here & Now; The Reflektor Tapes; Room; and Youth, screening in multiple theaters across New Orleans.

Closing the festival on Oct. 22 is Brooklyn, starring Saoirse Ronan, playing at the Prytania Theatre. The film tells the story of Eilis Lacey, a young Irish immigrant navigating her way through 1950s Brooklyn.

The NOFS has also partnered with Deep South Studios and the Louisiana Endowment for the Humanities to create the 2016 Create Louisiana Filmmakers Grant. It will be awarded to one local filmmaker at this year’s festival before the closing night film, and it will provide $50,000 to create a short film project that will screen at next year’s festival. Tickets go on sale to the public Oct. 12. neworleansfilmfestival.org