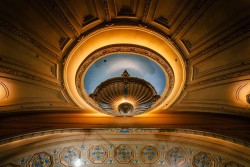 After 10 long years of lying dormant — thanks to Hurricane Katrina — New Orleans’ own Orpheum Theater has come alive to much fanfare with the Louisiana Philharmonic Orchestra’s opening show just last month. Built almost a century ago by architect G. Albert Lansburgh who was known for his work on luxury cinemas, the Orpheum is a Beaux Arts theater created in one of the country’s few remaining vertical hall designs.

Last year, Dr. Eric George partnered with builder Roland Von Kurnatowski and together they completed a $13 million renovation that not only resorted the theater to its original grandeur, but added state-of-the-art audio and lighting systems, and new facilities for both performers and guests. New additions to the Orpheum include an adjustable orchestra floor, a marble-paved lobby, a full kitchen in the basement, two new VIP areas on the Gallery Level, eight new restrooms and six permanent bars.

Although the Louisiana Philharmonic Orchestra is the anchor tenant at the Orpheum, the Downtown theater has already booked big stars for this month, like country music singer Dwight Yoakam on Oct. 10; a city salute to Frank Sinatra, featuring local musicians Kermit Ruffins, John Boutte and Jeremy Davenport on Oct. 23; and comedian Rickey Smiley on Oct. 24. For tickets and more information on upcoming events at the Orpheum Theater, please visit orpheumnola.com.

This year, the New Orleans Film Society has selected the recently restored Orpheum Theater for its kick-off celebration on Oct. 14. The lineup of feature films that will be shown during the 2015 New Orleans Film Festival was selected from over 3,400 submissions from more than 100 countries around the world. Even more exciting, 2015 marks a New Orleans Film Festival first time as an Oscar-qualifying festival in the documentary shorts category. For more information, tickets and a list of this year’s screenings, please visit neworleansfilmfestival.org.

Save the Date: Canal Street — Home for the Holidays!
Mark your calendars for a host of Downtown holiday events that kick off next month! You and your family will not want to miss this year’s holiday extravaganza that starts on Nov. 24 with the Canal Street Lighting Ceremony in front of the Astor Crowne Plaza. Then on Dec. 4, 11 and 18, the Downtown Development District and The Outlet Collection at Riverwalk will screen Holiday Movies on the Mississippi. On Dec. 5, the Krewe of Jingle will roll from Lee Circle up St. Charles Avenue, down Canal Street and along Baronne Street to Howard Avenue spreading holiday cheer in its wake. Finally, lace up your tennis shoes for the Reindeer Run & Romp on Dec. 12, where the race begins and ends at The Outlet Collection at Riverwalk. For more information, please visit downtownnola.com/holidays.