One of Hollywood’s most charming, funny and versatile actresses wows audiences with her role on The Jim Gaffigan Show, loves life as a mom and champions dog rescue as celebrity co-chair for the Louisiana SPCA’s Howling Success Patron Party & Gala. 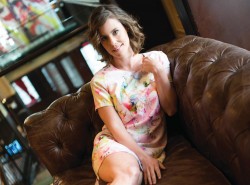 Multi-talented actress Ashley Williams is hitting her Hollywood stride, thanks to her role on TV Land’s hot new comedy The Jim Gaffigan Show. The delightful, intelligent and innately hilarious actress plays standup comedian Jim Gaffigan’s wife Jeannie as they raise five children in a two bedroom apartment in New York City. The popular and critically acclaimed show, which debuted in July, was renewed for a second season in August. Loosely based on the Gaffigans’ actual life as Catholics raising their large family in Manhattan, Williams’ character serves as an entertaining, believable and integral part of the show, and Williams has earned accolades for her excellent, realistic acting and for her charm, depth and comedic heft.

“It’s so much fun being part of something I really believe in,” says Williams of The Jim Gaffigan Show, written by comic/author Jim and Jeannie Gaffigan (who serves as head writer and executive producer of the show). Notably, TV Land gave the comedic writing husband/wife duo complete creative control of the show. “Very true to form to the Gaffigan spirit, they play the show as the reality of their lives, which makes the comedy very grounded,” Williams says. “Jim is an interesting figure, a well-loved comedian and a respected writer, and his story is now famous. Up until last year, Jim and Jeannie literally lived in a two bedroom in the Bowery raising five kids. I went to dinner at their house and it was extremely organized and clean. When I arrived their son Michael was in a Spider-Man costume and attacked me; somebody sat on my lap; somebody else was draped around my shoulder, and we read stories and talked, and their son Jack lost a tooth at the dinner table. All this crazy stuff was happening but it all felt very natural. I sort of didn’t want to leave because it was like being in the middle of a really fun party. They just go with it and embrace the chaos.”

Williams has enjoyed performing in dramatic roles throughout her career, and, on The Jim Gaffigan Show, which also airs on Comedy Central and Spike, she shines brilliantly in the comedic spotlight. “I get to be really crazy,” Williams says. “I’m playing a real person, and real people have many levels; sometimes they are completely in control, and then they have days where they are completely insane, and I get to do both of those things on this show. Jeannie Gaffigan is brilliant and has a very commanding presence, and it’s an honor to represent her.”

The incredible cast of The Jim Gaffigan Show — which in addition to Gaffigan and Williams includes Michael Ian Black as the family’s real estate agent and Jeannie’s best friend; Adam Goldberg as Jim’s fellow comic and best friend; and Tongayi Chirisa as family priest Father Nicolas — has been lauded for its onscreen chemistry. “It’s an amazing cast, and I have to say it’s really fun to be the only girl in this kind of boys’ club,” Williams says. “I can hold my own, and Jeannie and I stick together. Everyone sort of knows Jeannie runs the house, so, in some weird way, it makes me feel that I run the set,” Williams says, laughing. “I’ve been such a huge fan of these actors for so long. They are so solid and really funny, which works really well in keeping with the show’s tone. I could not be more thrilled to work with them.”

Williams is an optimist who radiates happiness, so keeping her secret of being pregnant during filming for the pilot for The Jim Gaffigan Show required considerable discipline. “We shot flashbacks to when Jeannie was pregnant, and I was wearing the big fake belly,” Williams says. “I was pregnant, pretending I wasn’t pregnant, pretending I was pregnant on the show — it was so meta! When the show got picked up I thought, ‘Am I going to have a baby and a TV show? There’s no way life could be this awesome!’”

In October 2014, Williams and her husband, independent film producer Neal Dodson, celebrated the arrival of their son Gus, whose first birthday party was being planned at the time of this interview. “It’s really a party for me and my husband, because Gus will have no idea what’s going on,” Williams says. “We’ll have friends over to play in the yard and eat steamed carrots, and then we’re going to give him cake out of a box, because, to be honest, it’s just so delicious and he’s never had sugar before. We’re going to put that in front of him and let him make a big mess, and then put him to bed, then have a gigantic taco party with alcohol.”

It’s uncommon for a woman to claim that childbirth is actually her hobby, yet Williams is as a certified birth doula who gives physical, emotional and informational support to women and their partners before, during and after childbirth. “It is the strangest hobby of all time,” she says. “I am passionate about women feeling educated and empowered as they go into their birthing. It’s truly fascinating. Being around all the babies and pregnant women scratched the itch for a bit and allowed me to wait to have Gus — at home on the living room floor!”

Williams is a triple threat as an actor, having done a slew of projects in television, film and theater. She made a name for herself starring in NBC’s television series Good Morning, Miami and had a memorable role on How I Met Your Mother. She was in the Lifetime telefilm Montana Sky, and other television credits include The New Adventures of Old Christine, Monk and Saving Grace. Williams appeared in the film A Most Violent Year; starred in Something Borrowed; and was in the indie film Margin Call, which was produced by Dodson, debuted at the 2011 Sundance Film Festival and has Kevin Spacey, Jeremy Irons and Zachary Quinto in its lineup. She has performed Off Broadway and on Broadway in A Time to Kill, a stage adaptation of John Grisham’s best-selling novel. She recently filmed The Brits Are Coming and Six Love Stories, and starred in October Kiss, a Halloween-themed movie that premiered in October on the Hallmark Channel. Next year, she’ll film season two of The Jim Gaffigan Show.

Inspired by her sister, actress Kimberly Williams-Paisley, Williams tried acting at a young age. “I’ve been trying to copy my big sister since I was born, and, suddenly, she got cast opposite Steve Martin, Diane Keaton and Martin Short in Father of the Bride when she was 19. I thought ‘Well if she can do it, I can do it!’” laughs Williams, who landed a role on As the World Turns as a teenager. “I was in high school and loved getting to ride the train to work. Being around adults all day was fun and helped me understand how to be a working actor.”

Born in Westchester, New York, to a loving family, Williams was allowed to be extremely inventive as a child. “We grew up in a colorful and fun house full of games and laughter,” she says. “That house was extremely chaotic, and, unlike Jeannie Gaffigan’s house, it was unorganized; my Mom famously had a stack of The New York Times piled so high next to her bed that eventually she just put a lamp on it! [Laughs]. But we had a great childhood.” Along with her mother, father and sister Kimberly (who is married to country music superstar Brad Paisley), Williams’ immediate family includes brother Jay Williams, a firefighter and EMT who recently made national news after he and his firefighter friends came across a man who was gored by a bison, while they were hiking on Santa Catalina Island. “It was his first time on the news and we were blown away because my sister and I are on TV regularly, but my brother is a hero who deserves to be recognized because he risks his life every day.”

For 10 years, the close-knit Williams family has struggled to come to terms with their mother Linda’s diagnosis of primary progressive aphasia, a form of dementia. Williams-Paisley partnered with the National Association of Insurance Commissioners to bring awareness to the disease and to encourage people to consider healthcare plans for the future of their loved ones. “It has been excruciating, and Kimberly wants to help normalize it because there is still so much shame surrounding the disease, yet it touches so many families’ lives,” Williams says.

Williams’ rescue dogs Phillip and Chi have been a big part of her family, and, to further her zeal for animal rescue and adoption, she is serving as a celebrity co-chair for the Louisiana SPCA’s Howling Success Patron Party & Gala (la-spca.org/howlingsuccess) Nov. 7 at the Hyatt Regency New Orleans, which will feature a groovy ’70s theme. “I am so grateful to represent my passion for rescuing dogs,” Williams says. “I am extremely in favor of adopting, not buying dogs. Phillip was the first dog we adopted, then we rescued our dog Chi. Phillip is like my first child: He taught me how to be a mom and how to take care of someone besides myself. Chi was in an awful car accident and left on the side of the 405 before we got her and was in traction for eight months. She flopped around with a bum leg but she always had a cheerful disposition. Chi was amazing and we miss her so much; Phil is almost 10 now, and he’s led a great life.”

Williams supports aggressive spay and neuter programs to control animal population. “Anyone who wants to purchase a new dog should be required to work in a shelter for two hours,” says Williams. “I’ve volunteered at many shelters, and that education changes your outlook on the animal population and what needs to be done, and, honestly, the ignorance involved when people decide to purchase a dog is surprising. Even if your heart is set on a purebred, you may have to be patient for a few weeks, but you can rescue that dog instead of supporting puppy mills.”

It’s fitting that Williams supports the Louisiana SPCA, given that she is enamored with New Orleans. “We love New Orleans,” she says. “My husband and I love food, and we always eat at Emeril’s restaurants. Last time we ate at Herbsaint, and I always have to hit Café Du Monde. I’m embarrassed I’ve never eaten at a John Besh restaurant but would seriously make a trip to New Orleans to do so! I have a mild shrimp allergy that makes my lips itch a bit, and, in my husband’s wedding vows to me he said, ‘I promise I will always remind you of your shrimp allergy when we’re in New Orleans, even though I know it means you’re going to eat the shrimp anyway,” Williams says, laughing. “I just don’t care in New Orleans, the food is so incredible!”

A graduate of Boston University’s prestigious School of Theatre Arts, Williams relishes visiting the old haunts of renowned playwright Tennessee Williams in New Orleans. “We are huge fans and love walking the streets where he lived and wrote,” she says. “I’m dying to go to the Stanley and Stella Shouting Contest at The Tennessee Williams/New Orleans Literary Festival. There are 10,000 people that attend, and, hands down, in my lifetime, I must do this!”

3.38K
previous Local Vocal Wonder
next When Ideas Take Off