When Ideas Take Off 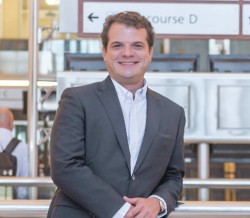 Beginning Nov. 15, business and leisure travelers wanting to get to those underserved markets in the mid-South will have a more efficient and non-stop travel option, thanks to new local air carrier GLO, and its founder and CEO Calvin Clifford “Trey” Fayard, III. Based out of the Louis Armstrong New Orleans International Airport (MSY), GLO’s mission is to provide “fast, comfortable and convenient air service that couples the time efficiency that comes from flying nonstop with the luxury expected from a first-rate air carrier,” Fayard says. GLO provides daily, nonstop air travel between New Orleans and Little Rock, Arkansas; Shreveport, Louisiana; and Memphis, with plans to expand service to additional Gulf and Mid-South destinations.

A Louisiana native, Fayard earned a Juris Doctor degree from Tulane University Law School, with a certificate in Admiralty & Maritime Law. Before that, he studied Shipping, Trade and Finance at Sir John Cass Business School, City of London, and received a Bachelor of Arts in Political Science from Southern Methodist University. Fayard’s vision for this company grew out of necessity.

Prior to creating GLO, Fayard was the Managing Director of Cornerstone Gas Corporation and Founding Principal at Coliseum Property Group, which required him to do a great deal of travel to clients in underserved regional markets. He spent much of his time trying to develop efficient travel plans for himself and colleagues. Earlier in his career, Fayard was employed at Maersk Sealand/A.P. Moeller where he assisted in managing vessel and cargo operations between Africa and South America, and all discharge ports in the United States. Although he had no direct experience with aviation, Fayard was always fascinated in the field; he points out the strong correlations between the marine shipping and aviation industries.

Fayard first started developing his business plan for GLO in 2010, and several months later, in 2011, he started his research phase, driving across the Gulf South to “validate” what he saw as an opportunity by personally meeting with airports — and small, medium and large companies — that could benefit from this type of nonstop regional travel.

“The image of the ‘typical business traveler’ has changed a great deal from what we have seen over the past few decades,” Fayard explains. “People no longer want to spend several days out of their week on the road, which is why GLO’s flight schedule follows a typical business pattern, with early flights out that allow someone to transact a full day of business and get home the same day to sleep in his or her own bed. Basically, we’re selling the customer time.”

Fayard also points out that air travel with GLO is quicker and even cheaper than driving, which would incur the cost of gas and lodging. The flights, which will connect to Bill and Hillary Clinton National Airport in Little Rock, Shreveport Regional Airport and Memphis International Airport, begin at $189 for a one-way ticket, including taxes and fees. Passengers can bring three bags and one personal item at no additional cost.

Fayard says GLO is committed to customer satisfaction and comfort. “For most people, a private aviation experience is not within reach, but GLO wants to offer that level of comfort, while also being accessible and affordable,” he says.

“Right now, we are focusing on supporting local people and business,” Fayard says. “We live here in the community and want to do right by our customers by delivering the level of hospitality that people associate with New Orleans.”

Though GLO’s first flight will not take off until this month, the company launched at the end of September, and Fayard says the response and feedback has been excellent. “I have people walk up to me and tell me what a great idea this is,” he says.

When asked about the name, Fayard notes that all great ideas start with a spark, but, as they gain momentum and become a reality, they begin to truly “GLO!” flyglo.com