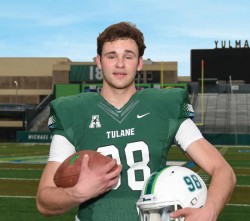 Golub also made history that day, when he became the first legally blind player to compete in a Football Bowl Subdivision program during an NCAA game.

Born legally blind, with no sight in his right eye and limited vision in his left, Golub says he has always been athletic, playing “practically every sport” growing up, and started playing football in middle school, outside of Boston, as a center and defensive lineman. When he decided this was something he wanted to pursue in college, he shifted his focus to becoming a long snapper, because he says, “There’s just not a lot of great snappers out there!”

A true team player, Golub does not want the individual attention and is less interested in making history than he is on helping the Green Wave continue to win games. “I don’t consider my vision being an issue,” he says. “I’m happy to get out there!” Fearless, Golub says it is “not at all scary” to take the field of such a high-impact sport with limited vision. “I love it, and I want to just be out there as much as possible,” he says.

As with any athlete, Golub focuses on practicing his form, completing the process in slow motion to ensure his snap is consistent every time. He also relies on feedback from fellow teammates to improve or make adjustments. Tulane University head coach Curtis Johnson, Jr., says that Golub is a dedicated and hardworking team member.

Golub received walk-on offers from both Tulane University and the University of Illinois, but he felt that Tulane was a better fit. The sophomore business major says he was drawn to the “great academics at Tulane” as well as the football program, and he is enjoying New Orleans. He says he is thankful for the opportunity that Tulane’s coach Johnson gave him, and, while he has “never been thrilled” about the media attention, he says, “I’m hopeful it can ultimately help someone else facing challenges.”