In 1982, when prominent New Orleans businessman Paul S. Rosenblum was invited by some peers to become involved with the board of Touro Infirmary, they told him that it was a rewarding experience. 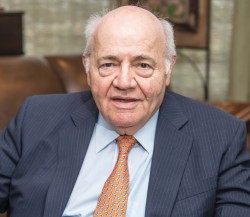 Today, more than 30 years later, Rosenblum says, “Well it was and it obviously still is, because I’m still here!”

Rosenblum began his dedicated service to Touro as part of board leadership, and, in 1985, he became Chair of the Governing Board’s Development Committee. Touro Infirmary is the only not-for-profit, faith-based, full-service community hospital in New Orleans. In 1991, Rosenblum and fellow board members, Joseph E. Friend and Buddy Jacobs, created the Touro Infirmary Foundation to support the hospital’s mission of providing the highest quality healthcare. “[Joseph Friend was] instrumental in getting the foundation off the ground,” Rosenblum says. “If it weren’t for his dedication, we may not be where we are today.”

In 1993, Rosenblum began his term as the foundation’s secretary, while still serving as Vice Chairman of the Governing Board. The next year, he became Chairman of the Governing Board, which he held for two years, before serving as the Touro Infirmary Foundation Chairman from 1995 to 2008. During his leadership of the foundation, he helped initiate several philanthropic causes, including the Legacy League, Cancer Caring Partners and Corporate Colleagues.

Though his involvement with the hospital has spanned more than three decades, Rosenblum says that it did not take him long to realize that this was a mission that he could truly appreciate. “The hospital has a strong place in New Orleans, and the community is so well served to have Touro,” he says.

In 2013, Rosenblum helped create the Paul S. Rosenblum Leadership Series, an interactive, six-week program to engage future leaders in conversations and analysis of the state of community health care. Rosenblum says they just completed the third class in the series, which consisted of more than 20 young professionals ages 25 to 35. “It’s very interesting to me that 25 years ago we couldn’t have filled a class like this.” Rosenblum says. “But today, health care is such a big part of the U.S. government, people are concerned for its wellbeing and theirs. There’s just so much more interest in quality health care!” Rosenblum says the experience of working with these young professionals has been very gratifying in that he is helping to “plant that seed” and groom future board members.

In 2010, the Touro Infirmary Community recognized Rosenblum for his service to the hospital community and his generous philanthropic efforts over more than three decades by awarding him with the Judah Touro Society Award. The award is given to individuals who have made an outstanding contribution to Touro’s wellbeing. This year, the award will be presented to Dr. Jay M. Shames, who has been a Clinical Professor at Tulane Medical School since 1986. Rosenblum feels that Dr. Shames is “absolutely a wonderful choice” for this prestigious award and is “certainly deserving,” considering his long tenure with the hospital. Dr. Shames will be presented with the award at the Touro Infirmary Foundation Gala on Nov. 14, followed by the second annual L’Dor V’Dor post Touro Foundation Gala at Mardi Gras World. For tickets, visit thetourofoundation.com/ldor-vdor/.