Having triplets in New Orleans is a blessing. 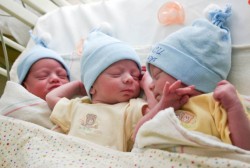 Boy, am I glad I live in New Orleans. I’m the mom of seven-year-old identical triplets, and, while life has gotten easier in the past few years, the early years were brutal. But not as rough as they might have been if I lived somewhere other than New Orleans.

It all started when I first found out I was pregnant with triplets. It was the most shocking news I have ever received — and ever hope to receive (unless we’re talking a lottery win) — and my doctor at the time told my husband and I to go have a drink. At 11 in the morning. Well, who am I to argue with a doctor? We called our friend who owns a pub in the neighborhood, and I had a (very small) glass of wine. Only in New Orleans, right?

A few months later, I was under the care of another doctor, a very kind and gentle doctor of Maternal-Fetal Medicine. He was very reassuring about my high-risk pregnancy, and he called everyone “kiddo.” Not just me, but also each of my babies as he pulled them out during my c-section. “Three kings,” he declared as boy number three was born. His lilting New Orleans accent made my potentially scary pregnancy not so terrifying.

I’d never even seen triplets before I found out I was having my own. But one afternoon, a friend and I were having lunch Uptown when I saw a family come in with three infant seats. “Could that be…?” I hemmed and hawed about going to talk to the family. I wanted to let them enjoy their meal in peace, but, then again, if this was a local triplet family, I needed to meet them.

So eventually I worked up the nerve to go to their table and ask the question dreaded by all parents of multiples. “Are those triplets?”

Before they could roll their eyes too much at me (trust me, I know they wanted to), I quickly told them that I was pregnant with triplets. Their demeanor changed immediately. We had dozens of questions for each other, so we exchanged email addresses. We were instant friends, in the way that you often are with people in New Orleans.

Ten days before they were born, I was admitted to the hospital to be kept under observation. The day I was admitted, an older woman came to my room, and, in the friendly way that is so quintessentially Southern, she introduced herself and suggested I go next door and visit with her daughter, who was pregnant with quadruplets.

Being 32 weeks along with triplets, I was not feeling my most social or mobile so I declined her offer. Ten days later, I found myself the mother of three tiny baby boys. As it turned out, the quadruplet mom went into labor that afternoon and delivered her four girls that evening.

The next day, we finally met in the hallway outside of our rooms. She was returning from the NICU, and I was on my way there to meet my sons. Little did I know that nearly eight years later, we’d still be friends and our children would be classmates. As happens so often in New Orleans.

Three months later, I found out through the grapevine that there was a support group in the city for triplet moms. I couldn’t believe how many moms were at the meeting. Who knew there were so many triplets in the Big Easy? My new friend and I had the youngest babies by far, and we sat back in awe, hearing the stories from these other moms. They had survived! And we would too! We peppered them with questions and proudly showed off photos of our growing babies.

Over seven years later, now we are the seasoned vets, and we pass along our wisdom to the new moms of triplets. We have playdates for the kiddos and cocktail parties for the parents. We get together for margaritas, while our husbands take over parenting. When a mom reaches out for help, we circle the wagons and take care of her. Because that’s what you do in New Orleans.

I know lots of moms of triplets in other cities, and I’ve heard so many horror stories about rude strangers and invasive questions. “I feel sorry for you” and “better you than me.” But never in New Orleans. Here, it’s “you’re so blessed.” And I am, to have had my triplets in New Orleans.