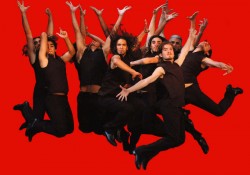 Dynamic ballerinas with the Dance Theatre of Harlem will take the New Orleans stage this month, followed next spring by dance ensembles from Cuba, Chicago and Argentina as the New Orleans Ballet Association’s 2015-2016 Main Stage Season continues to shine the spotlight on an assorted variety of dancers and dance forms.

Though NOBA leaders did not intentionally choose performances that reflect headlines — such as the recent thaw in U.S.-Cuban relations — the connections are not purely incidental. NOBA leaders annually aim for diversity, and the season’s connections to timely social issues serve as a testament to the pertinence of artful movement.

“Dance is such a relevant, progressive art form,” says Jenny R. Hamilton, executive director of NOBA. “What’s beautiful about the art form is it remains so relevant to things going on in the community.”

The historic Dance Theatre of Harlem, to perform at 8 p.m. Nov. 21 at the Mahalia Jackson Theater, was founded in 1969 and famed for breaking boundaries with bold moves and multicultural members. Led by former principal ballerina Virginia Johnson, the company uses the art of ballet to celebrate African-American culture.

The season continues in March with the first New Orleans performance of Cuba’s Malpaso Dance Company. The Havana-based ensemble, to showcase Cuban contemporary dance, is presented via a partnership between NOBA and the New Orleans Center for the Creative Arts at 8 p.m. March 11 and 12, and 2 p.m. March 13 at NOCCA.

The season closes May 7 with the New Orleans debut of Argentina’s Che Malambo, a whirling, stomping, rhythmic display of South American cowboy culture. The 14-strong troupe of male Argentinean dancers express the gaucho tradition with bombos (Argentine drums), boleadoras (leather-and-stone lassos) and precise footwork. The show begins at 8 p.m. at the Mahalia Jackson Theater. nobadance.com
Food for Thought: The Photography of Modernist Cuisine: The Exhibition offers an appetizing new perspective on food.

The images are as eye-catching as they are mouthwatering: layers of juicy vegetables simmering in a pot, a wild kaleidoscope of colors found in magnified vitamin C, delicate smoke rising above thick patties of meat on a grill.

The Photography of Modernist Cuisine: The Exhibition takes a familiar subject — food — and dissects, magnifies, diagrams and deconstructs, using a heady combination of science and art to create magical views of everyday meals.

The traveling exhibition, a collection of dozens of large-format photographs of food taken by chef, photographer and scientist Nathan Myhrvold and his team, opened this fall and runs through March 1 at the Southern Food and Beverage Museum. “People have been loving it because it’s just so dramatic,” says SoFAB’s president Liz Williams.

Myhrvold and his interdisciplinary team of scientists, research chefs and writers have earned rave reviews for the photography in their books, including Modernist Cuisine: The Art and Science of Cooking and Modernist Cuisine at Home. The stunning shots incorporate techniques, such as panoramic stitching and microscopy, not often used in food photography.

“I wanted to show food from a new perspective, literally: through annotated cutaway views of the interior and close-up, by using macro lenses, supermacro lenses and even microscopes,” Myhrvold says. “We all know what rice looks like, right? But you don’t, really, until you have seen it the way an ant does, with uncooked rice grains looming as giant translucent columns.”

In conjunction with the exhibit, SoFAB plans to host science-centered events, including a pair of Nov. 7 talks by NASA scientist and pitmaster Dr. Howard Conyers on the relationship between STEM (Science Technology and Math) and barbecue. The children’s talk begins at 11 a.m., while the program for adults begins at 1 p.m.

Purloo, the restaurant inside SoFAB, also offers a nod to the Modernist Cuisine exhibition with a deconstructed Key lime pie. Admission to the exhibition is free with museum admission. modernistcuisine.com/events, sofabinstitute.org
Changing Hearts: Racial issues come to light in Benjamin Watson’s new book.

Watson’s introspective — and remarkably unguarded — post expressed a range of conflicting emotions that resonated with readers, going viral and garnering multiple interviews with media eager for an honest take on U.S. race relations. Readers have also been eager to hear more from Watson — and this fall, the veteran athlete delivers.

Watson offers more insights on race, class and religion with his first book, Under Our Skin: Getting Real about Race — and Getting Free from the Fears and Frustrations that Divide Us ($23, Tyndale Momentum), set for release Nov. 17. Though Under Our Skin is Watson’s first book, the 34-year-old Saints player has long been a standout on social media, where his sensitive insights about hot-button issues have gained followers beyond sports fandom.

Under Our Skin draws from Watson’s own life experiences as well as experiences of his family, friends and teammates to examine racial issues from multiple perspectives. “Being able to have an open, honest conversation — I hope to spark that and really promote change,” Watson says. “A lot of times we’re scared we’ll offend people, [but] the way we grow is … having that open dialogue.” www.underourskinbook.com

194
previous Canal Street: Home For the Holidays
next Louisiana’s Best