The unbelievable and unstoppable Leonard Fournette races to victory and greatness. 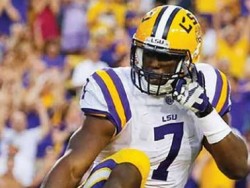 These words are uttered quite frequently nowadays by Louisiana State University Tigers football fans, who, in 2015, are living in quite interesting times. Taken aback by several years of postseason disappointment after playing in the National Championship game in 2007 and 2011, LSU fans find themselves witness to what may be one of the all-time great running backs in national college football history: Leonard Fournette.

LSU has a long and proud history of running backs who have plowed through the Southeastern Conference, including Steve Van Buren, Billy Cannon, Terry Robiskie, Charles Alexander, Dalton Hilliard and Jeremy Hill, and so the legacy is a rich one. And yet Fournette seems to be moving into another echelon, which includes the names of all-time SEC greats like Herschel Walker and Bo Jackson. And he is moving on to even greater heights.

Against the University of South Carolina Gamecocks in the Tigers’ fifth game, Fournette became only the tenth player in college football history to gain 1,000 yards rushing in the first five games of a single season, joining a rarefied pantheon of names such as Marcus Allen (with the University of Southern California in 1981) and Barry Sanders (with Oklahoma State in 1988). In doing so, he has at times looked like The Galloping Ghost himself, Red Grange — reborn, tearing into and then away from opposing defenses on impossibly long runs. History is happening in Tiger Stadium.

Against South Carolina, it appeared as though Fournette would not reach the record — as he remained bottled up all day — when suddenly, at the very beginning of the second half, he struck fast, rambling 87 yards through a gap in the middle of the line, virtually untouched to the end zone. Perhaps most remarkably, 50 yards down field, he actually appeared to pick up speed and pull away from the Carolina defensive backs who presumably were the fastest players their squad had to offer. The singular play also demonstrates all the talent the Tigers carry on their offensive line as well, as center Ethan Pocic and tackle Vadal Alexander could be seen veritably walling off an entire side of the Gamecocks’ defensive line almost by themselves, creating a massive crevasse for Fournette to run through on his way to the record.

At times, Fournette has also taken on almost mythical status, as he did versus the Auburn University Tigers. In what would ultimately be a blowout — in which he would gain 228 yards and score three touchdowns — Fournette blasted his way into an Auburn defensive back, who foolishly had attempted to tackle him, causing the defender to fly backwards and into one of his teammates, who also then flew backwards into a phalanx of even more teammates, leaping on Fournette like random fifth graders who had crashed a varsity practice. As Fournette glided out of bounds, he casually looked down at the wreckage of the multi-player pileup he had caused, and then turned around and returned to the huddle in businesslike fashion for the next play. On another play, Fournette easily flipped an Auburn defender over his back on the way to the end zone.

He is the stuff of legend, but these dramatic breakaway runs and bruising crashes demonstrate that Fournette has truly elite abilities, any of which could make a great player, but he has them all in combination: He accelerates and bursts through the holes his line has created before they can close; he has power to break tackles of even physically larger opponents; he has the agility to turn the corner or cut upfield; and he can outrun the fastest players he may encounter in the secondary. He has been described by respected former NFL players and NFL scouts as a running back with the size and build of Bo Jackson, possessing the burst ability to break tackles and burst around the edge like Adrian Peterson.

Since the beginning of the season, national pundits have named Fournette as a frontrunner for the Heisman Trophy, an award that an LSU player has won only once (by the great Billy Cannon in 1959). And obviously Herschel Walker and Bo Jackson, both of whom Fournette is often compared to, did win the award in their respective years. However, the comparison to Cannon, Walker and Jackson would be perfect if Fournette did something else they all achieved: driving their teams to national championship games. And apparently that goal motivates Fournette, who graduated from St. Augustine High School in New Orleans, a great deal, as he rarely discusses personal accomplishments, and instead regularly expresses admiration and appreciation for his fellow players.

As Head Coach Les Miles has said about Fournette, “The thing that makes him special is he’s a very humble man. He is a great teammate and leader. He wants to achieve as a group and as a team. His teammates enjoy him and root for him to have the kind of days that he’s had.” Awaiting greatness on the precipice of stardom, Fournette reveals one last additional rare talent — leadership — appreciating his team, earning their trust and confidence, and thereby leading them into battle as they sense a share in his accomplishments every step of the way. At the rate he is going, Fournette will take the whole state of Louisiana with him as well.