Enjoy the refreshing fizz of a Bellini 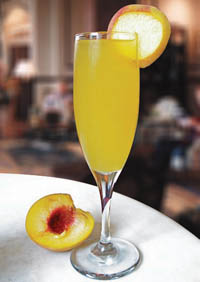 Although its scientific name, Prunus persica, would indicate that the peach is native to Persia, it actually originated in China. The sweet, fleshy pink fruit was passed from there to Persia through trade routes and eventually spread to the Roman Empire. In the mid-16th century, peaches were introduced to colonial settlements in America, where 200 years later, Thomas Jefferson would become one of their highest-profile proponents, planting peach trees throughout the grounds of Monticello.

In these modern times, the peach is heavily associated with the state of Georgia. Just about the only context in which this fruit can be referenced in New Orleans during college football season without enduring the scorn of Tiger fans is when it’s used in its most refreshing capacity: to make Bellinis.

The Bellini was first created in Venice, Italy, in 1948 at the legendary Harry’s Bar, which was frequented by none other than Ernest Hemingway, Orson Welles and Sinclair Lewis.  Original owner Giuseppe Cipriani’s predilection for peaches, which are in season from June through October, led him to experiment with ways to transform their “magic fragrance” into a drink he could offer at Harry’s Bar. Though Italy had a long history of marinating peaches in wine, Cipriani experimented with pureed small white peaches and added prosecco, an Italian sparkling wine. Upon testing the drink’s viability among his best and most refined customers, his creation was a hit. Customers insisted upon Cipriani’s offering it at Harry’s year-round. Needing a name for this favored refreshment, Cipriani noted the similarity between the pink glow of his cocktail (originally made with a hint of raspberry or cherry juice) and that of the toga worn by a saint in a painting by Giovanni Bellini, a 15th-century artist from Venice. The name would honor Bellini.

I have never known a lady not to enjoy a Bellini, no matter the circumstance or situation.  And I have never known a gentleman to refuse one, provided the proper context. (At brunch or an outdoor café in the afternoon with a date? Yes. At a friend’s bachelor party or a Saints game? Definitely no.) So as the heat of summer lingers well into October, we are lucky to be able to enjoy Bellinis well into fall. Instead of complaining about the sweltering heat or humidity, take the “can’t beat them, join them” attitude and throw on a sundress or slacks with loafers (sans socks, of course) and head to your favorite New Orleans bistro for Giuseppe Cipriani’s gift to us all.

Bellini
1 part pureed peaches (using in-season ripe, juicy peaches, you can create this yourself with a blender or food processor; when out of season, purchase peach puree at Whole Foods)
2 parts sparking wine (to be as authentic as possible, use prosecco, though any champagne or sparkling wine will do)

Note: To be completely authentic, add a few drops of raspberry puree, though this step is mostly for color, not flavor.

Robert LeBlanc manages and promotes three stylish and contemporary entertainment venues in the city, including Loa, Le Phare and the creative cultural center Republic New Orleans, of which he is managing partner.

309
previous Great Places for Thai Food
next Oh My Gourd!