Customer service is the key to success for this local company. 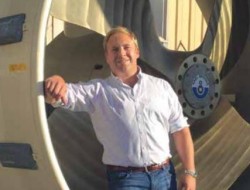 One could say that Karl A. Senner was born for this job. Senner, 30, is the president of Karl Senner, LLC, a marine product service company founded by his grandfather, Karl H. Senner, in New Orleans in 1972. KS is the exclusive North American distributor for Reintjes gearboxes and Steerprop azimuth drives. The company, which bases its new sales, service and parts in New Orleans, supplies these marine products for commercial, military and pleasure vessels both offshore and inland for the North American market, with power ranges from 300 horsepower up to more than 30,000 horsepower.

Today, Senner and his brother Christopher, who is re-establishing the company’s sales office on the East Coast, represent the company’s third generation of leadership. The brothers focus on the continued success of their grandfather’s vision by keeping customer satisfaction, dependable products and great support at the forefront of their business model.

“Our customer service is what sets us apart,” Karl says. “Of course, supplying a great product is our primary focus, but we pride ourselves on working closely with customers from the point of sale through the life of a vessel.”

KS sells and services products from two major international equipment manufacturers, Reintjes Gearboxes of Germany and Steerprop Azimuthing Propellers of Finland. As the exclusive provider for these two manufacturers in North America, KS has a large customer base that includes vessel operators, shipyards, engine dealers and marine architects.

Headquartered along the Mississippi River in Kenner, KS has “an impressive and unmatched inventory” of marine parts valued at more than $20 million — which, combined with the company’s three satellite service offices in Houston (opening in 2016), Seattle and Paducah, Kentucky — helps Senner’s team react quickly to customer needs.

“Our parts and service team is unmatched,” Karl says. “We understand that downtime is something our customers cannot afford.”

A graduate of Louisiana State University, Senner oversaw the company’s service department for two years before becoming president in 2014. He says one of his “biggest blessings” is being able to work with family, including his brother Christopher, who joined in 2011, and his father Ralph O. Senner, the company’s CEO. Christopher, who graduated from the Cox School of Business at Southern Methodist University, agrees, saying, “There’s something intrinsically rewarding about working with family. We all come from different backgrounds, and have different strengths and weaknesses, so we complement each other in different arenas.”

Directly after joining the company, both brothers individually had the opportunity to work at providers’ manufacturing facilities throughout Europe, Asia and the Middle East for two years. Christopher says this “great learning opportunity” allowed them to become familiar with the processes of production, assembly, research and development, product design, product development, sales, service and marketing.

Outside of the immediate family, the brothers are joined by a strong team of employees. “Our greatest asset is definitely our people,” Christopher says. “They are the lifeblood of the company, and [they] allow us to remain strong and continue to grow.”

Together, the two Senner brothers are working to grow the business their grandfather, father and uncle have built over more than 40 years. “As the industry changes, and we see fluctuations in the oil market, we have our challenges ahead of us, but we are set up with a strong base, great employees and loyal customers who will help us through challenging times,” Karl says. “We keep a continued focus on diversification and expansion. Our grandfather established some strong relationships, now it’s me and my brother’s job to further strengthen those relationships and form new ones. There’s always room for growth.”

1.79K
previous Beauty and Brains on Bravo
next The Art of Giving Back