Snap to It: The PhotoNOLA festival will include dozens of photography exhibitions. 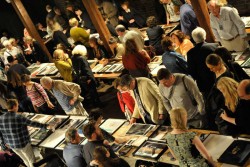 Photographer Bill Yates spent seven months documenting skaters at a skating rink in early-1970s rural Florida, building a familiarity that resulted in striking views of that precarious moment when teenagers — and an entire country — teetered between innocence and worldliness, caught in poses suggesting a strange combination of rebelliousness and vulnerability.

Be sure to catch Yates’ Sweetheart Roller Skating Rink exhibition, up at the Ogden Museum of Southern Art, as part of PhotoNOLA’s schedule of events. Here, a viewer can easily see the bottle of Schnapps tucked defiantly into the waistband of a young man’s jeans; the wide-mouthed laughing of two teenage girls as they grab hands and spin in a circle; and subtleties like the ribbing on corduroy pants, the expression in a child’s eyes as he takes a drag on a cigarette, the layer of grime on a pair of skates.

Physically viewing photography like Yates’, experiencing the art form in its various sizes, colors and formats, can be a refreshing way to enjoy this art form in an era that’s over-saturated with online photos, says Jennifer Shaw, director of PhotoNOLA. “Seeing the work in its finished form, in person, is always a treat,” she says.

The festival, coordinated by the New Orleans Photo Alliance, includes various workshops, gallery talks and other events — most of which are free and open to the public. photonola.org
–Laura McKnight
Breathing Life into Art: YAYA offers glass-making demos and art classes at a new Central City studio.

With a blazing furnace, a red-hot liquid medium and teams of artists working in carefully coordinated movements, the art of glass-making is naturally theatrical — and also less prevalent today as other art forms.

Young Aspirations/Young Artists Inc., an arts-education and entrepreneurship-training program based in New Orleans, offers free after-school programming for artistically inclined youth, as well as classes and workshops for the public in a range of visual media. However, the organization’s live demos tend to star the rarer art of glass-making.

“The process of transforming this liquid molten material into a work of art is kind of unique in the art world,” says Gene Meneray, CEO of YAYA. “It Inspires a sense of mystery and wonder.”

According to Meneray, the process happens quickly, which means audiences can watch the entire transition from raw material to piece of art through the collaboration of several artists. “You can see how the team works together to make the art — like a very effective dance troupe,” he says.

Throughout December, YAYA’s arts center (located at 3322 LaSalle St.) will host a number of demos and workshops. For example, on Dec. 11, James Vella of Vella Vetro Art Glass & Custom Design in the Bywater will hold a glass-blowing demonstration from 5 to 8 p.m. that is free and open to the public.

Attending a demo or taking a class also gives participants a chance to check out YAYA’s new arts center, which opened in July but began programming in September. Unlike YAYA’s former locations, the new center was designed with artistic uses in mind and consolidates the organization’s activities into one central spot, creating even more opportunities to explore the arts, Meneray says. yayainc.org
–Laura McKnight
In the Spotlight: Congratulations are in order for the winning films of the 2015 New Orleans Film Festival.

Another important aspect of the festival, Cinema Classroom, is an annual program that teaches students how to apply critical thinking to film and also provides the opportunity to meet working filmmakers. For example, students at Metairie Park Country Day screened The Lot, directed by Russell Blanchard. Meanwhile, Cinema Classroom collaborated with Play/Write to screen a series of shorts at The International School of Louisiana, including They Crawl Among Us!, directed by Sihanouk Mariona.